This Webinar is now over and is now available to Purchase Video. The recording is 3.5 Hours of information. To receive download of Webinar please purchase below- THANKS for all who attended!
Great session lots of valuable information shared and more added recently!

IGNITE ASTROLOGY WITH THE VENUS STAR –

As Venus makes her next retrograde Star Point in Aries, we welcome you to join us to explore and discover more about Venus, her cycle, her cosmic rhythm and divine dance, as she makes her next retrograde and star point in Aries. Since 2004 and 2012, when Venus made her TRANSITS over the Sun, the Venus Star has grown in popularity and cosmic consciousness used by many more astrologers worldwide. There is some debate between astrologers as to the begining of each Venus cycle, does it start with the retrograde point, or the outer superior conjunction point? We will discuss and consider, yet as this next star point will be in Aries during Venus’s retrograde, there seems no better time to ignite the mission as Venus resets her cosmic buttons!

For this webinar we have  gathered 3 dedicated Venus Star practitioners, who will share their findings with you, showing you how to work with Venus and her cycle. Venus’s Starry Points are confirmed in our heavens every 9.5 months, tracing a pentagon through the zodiac every 4 years and pentacle in the zodiac every 8 years. We will be gathering new astrologers for every segment to share their information each time!

Join us as we begin this ongoing series. By joining our first one, you will receive a discount to our second one which will be in January 2018, when Venus’s Star point joins Pluto all in the 20th degree of Capricorn!

This webinar will be in 3 parts in segments of 45-50 minutes each, with 5 minute cuppa breaks, and wrap up discussions of 15 minutes included at the end, where you can ask questions and finish the webinar with your own Venus Star Mission!

In conjunction with our Venus Webinars, we are also begining a mission to Ignite the Venus Star around the Globe, by co-creating with our Venus intentions, Art and Photos -We will also begin the C*I*A’s global Venus Star Mission to raise further consciousness to the makings and meanings in Venus’s Starry Points as they are confirmed in our heavens every 9.5 months. JOIN the VENUS STAR PROJECT on FB HERE:

The Cosmic Rhythm of the Venus Star – with Julija Simas
Each retrograde of Venus, often seen as an isolated event in astrology, is best viewed and understood as part of a larger cycle that includes the makings of the Venus Star in every astrological chart. Learn how to follow and use the Venus Star as part of this bigger cycle, repeating in patterns of 9.5 months, 1.6years, 4 years and 8 year cycles. By using and understanding the workings of the Venus Star within your astrological chart, one can tap into a divine, natural and co-creative rhythm that is embedded in your life. In this talk, Julija will present to you how to plot the Venus Star, follow your Star from your birth into the future, giving you insights into the co-creative spirit of Venus as the cosmic fractal flower unfurls endlessly in your chart.

The next Venus Star Point: March 25, 2017 at 5 Aries – Arielle Guttman –
Every eight years Venus completes two pentagrams over the zodiac. One is the Morning Star (MS) penta and the other is the Evening Star (ES) penta. These star points are derived from the moment the Sun, Earth and Venus reach maximum partile conjunction (or cazimi). This next one is in Aries and it will be the Morning Star. There will in fact be three passes of Venus over the Star Point degree in the next three months.

This gives a three-month window to incorporate the meaning of this particular VSP into our lives.The new Aries Star Point will be a Morning Star, which last occurred eight years ago at 7 Aries. The Evening Star Venus occurred four years ago, in 2013, at 8 Aries. So the areas of your chart that are most sensitive to this are 4-8 Aries or 4-8 Cardinal, where Venus’ message will be felt most intensely.

What are some of the characteristics of an Aries VSP? If you were born with this placement, you are someone who sets out on the journey of life to discover yourself most fully. It describes the archetype of the hero, soldier, adventurer, rescuer or leader whose mantra would always be: I did it my way. But young-ish, even when mature, this Aries VSP retains its youthful spirit. The “Hero” motif, most importantly, because these are the youthful spirits that are bold and visionary and take it upon themselves to pave the way forward.

Some examples of people born with this position (the Aries VSP) are: Jane Fonda, Elizabeth Warren, Bernie Sanders, Bob Dylan, Meryl Streep, Malala, Barack Obama, Jack Nicholson, Beyonce, Jay-Z, Kanye West, Taylor Swift. They are not just leaders in their field. They are outspoken, barrier-breaking, highly individualistic people who have something to say and usually say it, with fiery demeanor, even when Venus Star is involved.

The Aries VSP periods are times when any one of us might feel motivated to lead the charge. Because of this, and because of its degree and phase this year, I have named it the Year of Passionate Activism. There will be a lot of screaming mouths, like babies, all around us. How do we try to contain it and can we contain this fiery, warrior-like energy of Aries, as it continues to play out through 2017?

The 584 day Cycle of Venus and the Descent of Innana and when does it begin? – Gemini Brett

As the Aries  retrograde Venus point begins a new cycle of Venus, Agent 1123, Gemini Brett will transmit the greatest starry story ever told:  The Descent of Inanna, Queen of Heaven and Earth, into Erishkigal’s underworld Kur for death and rebirth.  This enlightening StarryTelling astronomical presentation will clearly show how the Sumerian tale of old follows Venus’ 584-day Synodic Dance with Earth and Sun.  The 40 days and 40 nights of Venus’s retrograde is often misunderstood as the Descent of Innana into the underworld, yet the with the retrograde Venus only disappears for about 10 days.

In this segment Agent 1123 will introduce you to discover one whole Venus cycle, you will be introduced to the Planetary cast who play the roles and set the stages and, most importantly, you will be given the keys to utilize the sacred timings of Inanna’s descent and rise in Earthly skies for profound personal growth in the next round. Since his first Venus initiation with Daniel Giamario’s Shamanic Astrology Mystery School, which unearthed this ancient practice, Agent 1123 has devoted countless hours towards the Archetypal Ascent and Descent of the Global Goddess.

We plan to continue these Venus Star online events every 9.5 months, bringing more information about Venus her cycle and phases with different astrologers at every Starry turn!

This webinar was recorded on March 2nd 2017 by live webinar, and has been added to with some extra info with using the Venus Star example that of the C*I*A Chart.


PLEASE NOTE : THE link for download after purchase will be sent to all who purchase within 6 -12 hours of purchase below:

All webinar details will be sent to the email associated with your paypal account, so do check spam, junk folders etc for confirmation!

To Register  Purchase via paypal here.
All registered will receive login link – One week, one day and one hour before webinar 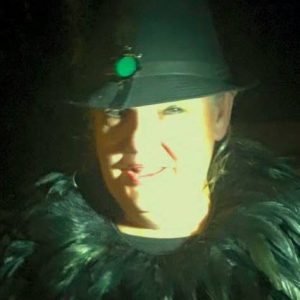 JULIJA SIMAS
The founder, motivator, designer and instigator of the C*I*A, the wheel behind the cogs. Agent 12 started the C*I*A with the grand idea that the world needs unity, a grand vision and a plan. In it’s own small way Julija hopes the Agency can contribute to raising consciousness, global awareness, unified thought and a better world through the fascinating world of Astrology. Completing a Diploma in applied astrology from “Astrosynthesis”- Melbourne, Julija wrote her finishing thesis- on the ANIMA MUNDI- in 2005 inspiring her to put her ideas into motion. She found a few interested Agents and started the ball rolling.

Her particular interest with the Venus Star started during the 2004 Venus transit and following the consequent Star points since, finding many relevant correlations to the makings of the star in her personal chart, clients charts and on the larger mundane levels. An Article written in 2012 for our first Venus Mission can be accessed here https://cosmicintelligenceagency.com/the-transit-of-venus-2012/
Julija currently teaches 20 C*I*A students at 2 levels, has a monthly Astro Group in Melbourne, runs the C*I*A membership program, organises our Agents of Chaos around the globe and spends all the rest of her professional time devoted to the C*I*A website, workshop and events.
Julija has lectured internationally at2 ISAR conferences 2014 and 2016, presented a Movie at UAC 2012 and looks foward to doing intensive work with the Venus Star at Co-Creative Astrology Rising Conference in Costa Rica May 2017

ARIELLE GUTTMAN
Founder and director of Sophia Venus, I bring 42 years of experience in using the language of astrology to people seeking answers and guidance about life’s questions. I believe the language of the cosmos, together with earth wisdom (Sophia) are the beacons of light necessary to guide us to the future that we as individuals and we as a species seek to create.

After 30 years into the field of astrology, I wasn’t searching for any new techniques. I’d been to all the conferences and heard most of the leading astrological authorities of our times. In those years, I collected and synthesized a personal way of working with astrology that involved mythology, archetypes, dreams, healing, psychological and spiritual insights through astrology and more. My particular loves were covered in the two-volume set of Mythic Astrology I co-authored with Kenneth Johnson. Another love was planetary astro-mapping, after having been certified by Jim Lewis (in 1986) and moving on to incorporate into Astro*Carto*Graphy some new methods of astro-mapping, including the use of asteroids, nodes, Chiron, and Local Space. What emerged from that was my passion for Geodetics (Earth Astrology) whereby the planets transit around the Earth, forming “hot spots” during certain periods of time.

So, this is all leading up to say – I had my hands full! But then, in 2004, during the first transit of Venus across the Sun, Venus began streaming information to me about her pentagram and individual star points. It was a body of knowledge (I was “told”) might take a full century for people to really grasp. But it was new and exciting and proven to be astoundingly accurate in personal chart work. Seven years later, the information that was given, came out in the book Venus Star Rising: A New Cosmology for the 21st Century. Since then, I have devoted most of my practice to using this material in ways that can open people’s eyes to the unconscious drives and needs that motivate them in life. Check it out for yourself. It has been twelve years now since the Venus Star Point theory arrived and I am still as captivated by its message as I was then. It is truly the starting and ending point for me in all my astrological pronouncements. Finally, (I believe) Venus has been restored to a much grander and fuller archetypal energy than what has been attributed to her. Her Star or Pentagram, is the Cosmic Heart Beat of the Earth and its inhabitants.

GEMINI BRETT
of More Than Astrology, Since his first Venus initiation with Daniel Giamario’s Shamanic Astrology Mystery School, which unearthed this ancient practice, Agent 1123 has devoted countless hours towards the Archetypal Ascent of the Global Goddess through his ongoing YouTube project, “The 13th Flower.”
Take a look to get a taste for Gemini’s StarryTelling magic.