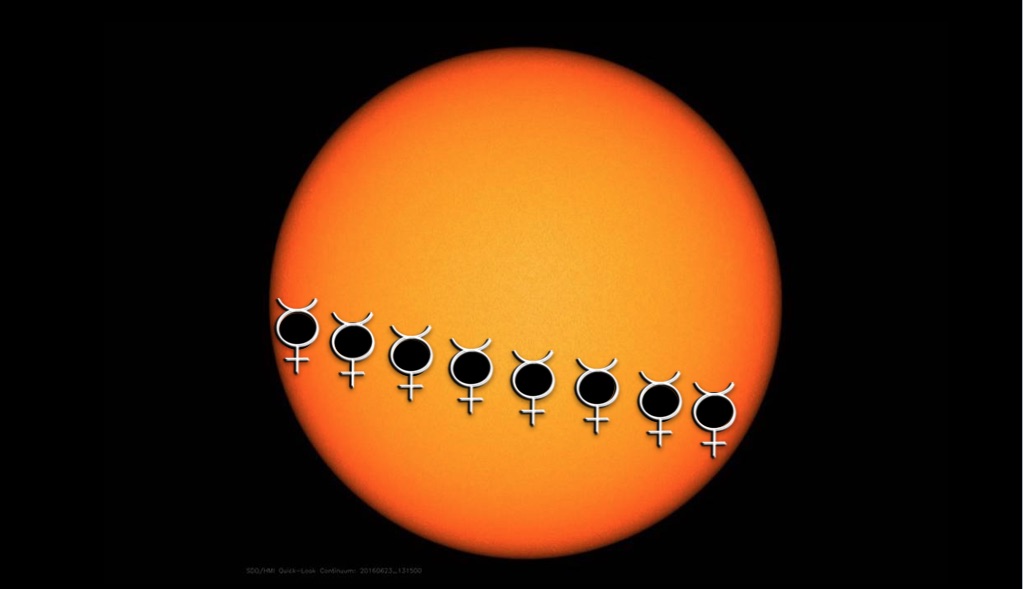 On Monday, 2019 November 11, Mercury will transit the Sun for the first time since 2016. The transit or eclipse of a planet across the face of the Sun is a relatively rare occurrence. As seen from Earth, only transits of Mercury and Venus are possible. There are approximately 13 transits of Mercury each century. In comparison, transits of Venus occur in pairs with more than a century separating each pair.

As both Mercury & Venus are between us (earth) and the Sun, they pass between us periodically creating ‘eclipses’. Because they are so small, they don’t block the Sun’s light so are not generally noticed down here on Earth. But they are considered quite ‘rare’ and when you check the above dates of previous Mercury eclipses the historical associations are very powerful in terms of social change.

They have fascinating cycles in their ‘eclipsing’ that make them major players in global evolutionary affairs. The last Venus eclipse happened in Gemini June 2012 in the midst of the Mayan Calendar 26,000 cycle shift. Mayan cosmology refers to this period as our Sun is aligning with the Galactic plane as a “doorway” through which Unity consciousness will come to dominate the mass consciousness of the Earth. The Mayans refer to this as the Return of Quetzalcoatl, the Plumed Serpent, and look to this timeframe within which the mass enlightenment of humanity will take place. And believe it or not this has been happening as the old-world order is breaking down.

Mercury is also a very important player in these shifting times, especially since the late 1700s as Uranus was discovered, heralding the birth of the Aquarian Age. Uranus has been given the title of the ‘higher octave of Mercury’ as he connects us to new frequencies emanating from ‘the source quantum field energy’ that may be downloaded to feed through Mercury. Mercury Eclipse November 11th 2019 Maggie Kerr AAT Page 2

Thus, the science & technology age we are now experiencing with a major acceleration since the late 1800s, 1940s, 1960s and 1990s and beyond, has been using dear little Mercury to bring us this unprecedented wave of techno innovation…with so much more to come.

Mythically Mercury is the ‘God of the Crossroads‘, connecting and stimulating the trade and commerce of life plus communicating and networking the words & ideas & people that bring forth new activity for this commerce. Traditionally Mercury rules Virgo & Gemini, the signs that bring forth ideas and then order and make them productive. In Esoteric or spiritual Astrology Mercury rules Aries i.e., action follows thought – in the beginning was the word etc. So, he is a very powerful little dude as he does his thing flitting between heaven and the underworld triggering and conveying the ideas and inspiration that drives the unseen forces of evolution.

The historical Mercury/Sun Eclipses feature many examples of revolutionary independence movements including also being a player in the French Revolution…as Uranus & Pluto were in opposition at that time and Pluto was in Aquarius. He returns to Aquarius in 2024 for the first time since then!

The major factor or feature that underpins these revolutionary forces is always money & resources – i.e. Taurus/Scorpio the only signs in which Mercury Eclipses occur. This eclipse cycle always happens when Mercury is retrograde in inferior conjunction with the Sun in the axis of Taurus and Scorpio. So, this cycle has great impact on collective values/money/ resources activity. Recent previous Mercury eclipses in 1999 & 2006 brought us the introduction of the Euro, & then debt driven madness that set up the ongoing 2008 GFC.

So where are we at as this next Mercury Eclipse comes in on November 11th?

Well we are in the midst a very intense geo-political/economic phase…in case you haven’t noticed! This is the result of two major sets of planetary forces.

First, we have the completion of the 20-year Jupiter & Saturn cycle…which began in 2000 in Taurus… and they next meet in December 2020 in Aquarius for the first time since 1405. This opens a new 240-year phase of the conjunction happening in Air signs opening a much more conscious phase in human affairs and the revolutions that will bring this about. These two ‘Karmic Lords’ drive the social forces that underpin or condition The Zeitgeist of the times and have everything to do with market forces and the ‘behind the scenes dudes’ that manipulate them.

“Each time they come around, I think there is a burst of questioning, and some cherished world-view dies while a new potential emerges. So their effect within the collective is to do with Old and New Kings once again, as their influence embodies the reality that we must constantly expanding beyond a current world view, if we are to evolve and grow as a species, and that an integral part of the human experience, is the ability to feel optimism and faith in what the future holds.” Liz Greene

And not let’s forget the really big news as this Mercury eclipse is just two months before the ‘Global Reset’ meeting of Saturn with Pluto in Capricorn in January for the first time since 1518! Think ‘The Reformation’ AND ‘The Renaissance’ all rolled into one in modern times 500 years later. Mercury Eclipse November 11th 2019 Maggie Kerr AAT Page 3

Since transformer Pluto entered Capricorn in January 2008 the wheels have been falling off the global financial bus as the deep forces of death and renewal have been at work revealing the rot at the foundation of our global economic model. Saturn then joined him in Cap in January 2018 for the first time since 1989 tightening the grip of nationalistic agendas with major civil unrest and activism arising globally in response to this.

As we head into 2020, we are at an evolutionary crossroads between the past and the future containing a major shift beginning in world affairs, leadership, and financial markets. As we enter into this portal we are in a crisis in faith, belief & meaning in our system plus a chaos of truth & lies and the whole business of what is real and what is not, and the extreme positions on offer in every stage of human affairs.

Bottom line is you can’t believe any of the lies and spin the old guard continue to weave in the desperate quest to stay in control. We are witnessing the ‘result’ of the profoundly unconscious drivers of our culture, based on fear and greed and non sustainable values. The chickens are coming home to roost…and they are not healthy chickens.

By December 2020 Jupiter joins Saturn and Pluto in Cap for the first time since 1284…and before that 3838BCE. This was the time when the Gods took over from the ancient Goddesses and patriarchal culture was born and we’ve been driven by the unconscious ARIES warrior programming ever since!

Using our power with Scorpio…

It is oh so easy to feel overwhelmed by the daily news of endless strife as we witness the breakdown of our society, and feel powerless to do anything as an individual in the face of relentless control and stupidity by the majority of our business and political ‘leaders’!

This is where our personal relationship with the Scorpionic death/rebirth process comes into the unfolding story of our times. We have been conditioned by our system to believe we are powerless, but we are not!!

Scorpio is the power to seed the life we wish to create from deep within us. We’ve been studying to be ‘metaphysicians’ for a while now folks, so we’re meant to have ‘got it’ that our energy creates and magnetizes our outcomes…right? Once we know that it is only our Ego/Mind keeping us in our fears and confusions, and that our Soul knows the way we open the magical flow known as the ‘stream of consciousness’ and step into our flow. Fabulous!!

Scorpio is the invisible source essence in our nature containing regenerative power, and the secret lies in knowing that we are ‘magnetic’. So, what do we want/need to magnetize becomes the question! And to get to our safe power we can also use the Scorpio process to just let go…of old shitty feelings…of the belief that we have to control…old defences we use to protect our true feelings…the belief that softness and vulnerability isn’t safe! Yep it’s re-birth time!

The time is NOW for conscious visionaries to rise up to offer a whole new possibility for humanity. Transformation is a process, and to accelerate this powerful movement we need change-makers who are willing to roll up their sleeves and work together across multiple domains for the greater good. Mercury Eclipse November 11th 2019 Maggie Kerr AAT Page 4

Our revolution also involves re-connecting to our spiritual values as part of the new zeitgeist, and indeed this has been arising big time as the practices of compassion and love and tolerance are returning as fundamental human qualities, and we re-connect to our natural world to be honoured and preserved and made sustainable once more, PLUS consciously working with invisible higher forces as source energy and inspiration. 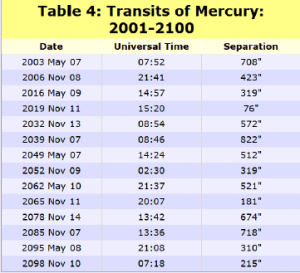 OK so this Mercury ‘eclipse’ in this potent cyclic soup is a major player triggering our threshold moment, as historically these eclipses offer ‘revolutionary themes re mind/ideas/inventions’ that stimulate material world matters. Just keep in mind these invisible evolutionary impulses and forces operate below the ‘threshold of consciousness’, and yes sometimes we also see immediate outer world events or shifts.

here’s to some major revelations during November of info certain people would rather stay buried! On the other hand, we can expect a flurry of ‘secret meetings’ and ‘behind closed doors’ activity as the surveillance state goes into overdrive to deepen their control mechanisms.

And yes, more big ups/down/extremes in global currency/share markets over coming weeks is a big possibility. But hey nobody knows what’s happening anymore…the global Ponzi scheme is coming to a major head and the confusing balls are all up in the air! Certainly not a time for risky speculation over coming months, but rather using upside Saturn for careful planning and strategy based on your true values. Ultimately, we are in need of a whole new financial model to arise in the next few years that returns power to productivity and sustainability, not just making gazillions through speculative trading by the elite few.

Mercury assures us that ‘our thoughts create our reality’. So, here’s your opportunity to transcend old limiting thoughts containing fear and insecurity. Our awakening higher consciousness allows us to manifest prosperous outcomes as we value ourselves and everything/one else in the unity consciousness of our co-creative life.

HERE is a fantastic website showing the transits in details from New YorkTimes.