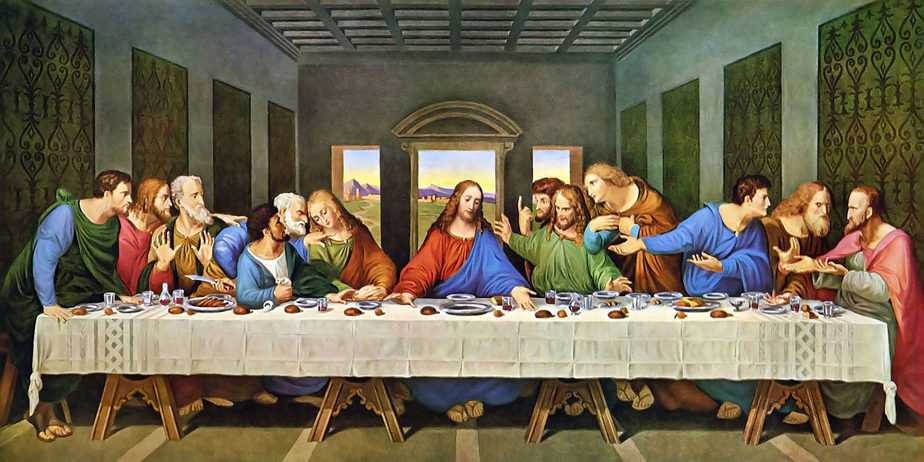 The allure of the number twelve

Leonardo’s Ultima Cena has intrigued and enthralled viewers for centuries. The painting will continue to be interpreted through both scholarly study and artists recreating it (Steinberg p. 14). Indeed, the analysis of the painting, and what da Vinci had in mind when he painted it, has been the subject of many books and articles, and will continue to engage the minds of thinkers in various academic disciplines. How does astrology enter the picture? Various spectators have asserted that each of the twelve apostles embody one of the twelve zodiac signs 1. If that was da Vinci’s intent, it must ultimately be decided by the viewer, because he never mentioned or wrote any ideas of the sort, at least that we know of. Still, such a complicated and magnificent painting must have more behind it than meets the eye! A question such as each apostle correlated with the signs of the zodiac in his Last Supper painting is keenly characteristic of da Vinci’s enigmatic work.

Previous popular analysis suggesting that each of the twelve disciples symbolizes one of the zodical energies, starting from the right of the painting with Aries (Simon), and ending at the left with Pisces (Bartholomew), seems incorrect. Of interest, two of the placements of apostles according to the zodiac signs in this order are correct, but by chance. A very logical and cogent grouping of the apostles is apparent upon consideration of the four groupings of three, in the painting.

The elements and modalities

The apostles are divided in many ways, at the moment of the dramatic announcement by Christ revealing an imminent betrayal. The most obvious is the groupings of trios, splitting the apostles into four small groups. The Christ figure has two groups of three apostles to his right, and two groups of three to his left, seated more or less in order of their importance (in other words, the more prominent apostles sitting closer to Christ).

The painting contains very important clues regarding the groupings of the apostles, directly to the right and left. Thomas raises a finger in doubt, and John sullenly reflects and acts as a mirror of the Christ figure in the painting. Thomas is typed as Virgo in the right to left zodiac scheme. But he is the twin! Thomas is Mercurial, but Gemini, not Virgo. Christ is the ultimate Piscean symbol. John reflects Christ in his demeanor and literally even his clothing. The mirror image of Christ in the painting, John, embodies the Pisces sign.

The key to unlocking the groupings of apostles starts with the water element: the three signs/apostles to the left of Christ. Peter is intensely rash and hot – Mars like – and he even has a stinger, his dagger! He represents the Scorpio sign. Judas, the traitor, represents the Cancer sign. He is holding a bag of silver! Judas also symbolizes the dark Moon, Cancer’s ruler. Judas is the shadowy figure in the painting who does not reflect light. The clandestine traitor, Judas, forms a pair with Christ in the painting. The Christ figure is the bright Sun 2, and Judas is the dark Moon. The two have a direct, sinister connection, which gives additional symbolic evidence of Judas as the apostle symbolic of Cancer.

Thus the watery signs are represented as mutable, fixed, and cardinal, from closest to the Christ figure to the farthest, in the first group.

The mutable-fixed-cardinal pattern continues to the right of Christ. Thomas, the twin 3, is part of the trio of airy signs. Philip, stretching towards Christ while gesturing with both hands towards himself, seems rather Venusian – long hair, no beard, almost reminiscent of paintings with Venus literally in them. His actions also suggest balancing, characteristic of the Libra sign. James, in the middle of Thomas and Philip, acts shocked, as though he can almost be heard saying, “Surely not!” He rounds out the thought and chatter of the other two apostles symbolizing air signs. His importance and stature in the group of apostles 4 is also consistent with Saturn, the classical ruler of Aquarius.

At the far right of the painting, Simon the Zealot symbolizes the Mars-ruled Aries sign well, via his reputation 5 and even his tough looking countenance. Thaddeus (Jude) literally has a flame (fire) as his symbol and he appears as oldest of the fire trio. In the scheme of “mutable-fixed-cardinal” he is in the middle and represents the Leo sign. Matthew defaults to Sagittarius, but a convincing link to Jupiter’s sign is that he was a publican 6, which demanded education and dedicated involvement with the expansive Roman empire.

The earth signs are intriguing for different reasons. James the Less, representing Taurus in the middle of the far left earthy trio, might actually be Leonardo 7! Leonardo was a Taurus Sun 8 and perhaps his own likeness and persona was duplicated in his painting. Andrew appears rather shocked and nervous by Christ’s announcement. As he appears, imagining that his Virgo sensibilities have been shaken up is not difficult. Bartholomew, on the outer left of the painting, seems a bit dour and definitely concerned. He is the Capricorn sign. The earthy trio appears somewhat muted and stable, compared to the other trios of apostles (note the active, spread out fiery trio, and the uneven heads of the trios closest to Christ. The earthy trio is quite level and looks consistent among the three).

Arguments regarding the apostles simply lined up with the zodiac signs point in the right direction, but if da Vinci meant for each apostle to represent a particular zodiac sign, the logical manner of doing so seems apparent in his painting: the elements and modalities associate each apostle with each of the twelve zodiacal signs, according to the four trios of apostles in da Vinci’s ubiquitous, quintessential painting.