The Lunar Occultations of 2019 : The Circle of Grandmothers and the New World Order

The Lunar Occultations of 2019

The Circle of Grandmothers and the New World Order

I am a woman on a universal mission: to seed the upcoming New World Order by activating the Circle of Grandmothers. Won’t you join me?

It’s a grand concept, to be sure, and won’t happen overnight – or even soon. But it CAN happen, and we are in the initial stages of this reclamation process even now. In fact, we are at a critical point in the cycle when the seeds of the next cycle are being sown. Our conscious participation gives us tools to envision and therefore create this new Capricorn paradigm. Furthermore, 2019 presents us with a series of solar and lunar invitations to do just that!

I’ve been a long-time user of Jim Maynard’s annual Celestial Influences astrological calendar. In the back are extra tables of astronomical phenomena which includes a list of occultations by the Moon. My eyes popped when I saw the list for 2019, because there is an unusually high number of them. It turns out they are also of above-average importance.

What is a lunar occultation? This phenomenon occurs when the Moon passes between the earth and a star or planet, temporarily obscuring it from our view i. It’s an eclipse of sorts, and requires an exact alignment in several different celestial planes. Because they are unified on more than one plane of measurement, these occultations are more than a simple conjunction and deserve an elevated delineation. We interpret regular eclipses as endings and beginnings, seed times when circumstances and conditions are ripe for change and development. I believe we can use the same concept with this year’s occultations to help seed and create a new Capricorn paradigm.

Take a look at this list of 2019 lunar occultations to see why they are quite remarkable even to the untrained eye:

The most amazing thing about this year’s occultations aside from their sheer number is that from February through December, Saturn and Pluto will both be occulted every time the Moon transits through Capricorn.

This seemed remarkable to me so I did a quick tabulation of lunar occultations based on Maynard’s calendar for the years 1988 through 2019. The year in question has by far the most with 29 occultations. The only other years that come close are 1991 (25 occultations) and 1999 (23), when the Moon occulted Uranus and Neptune for several months in a row. (See table) 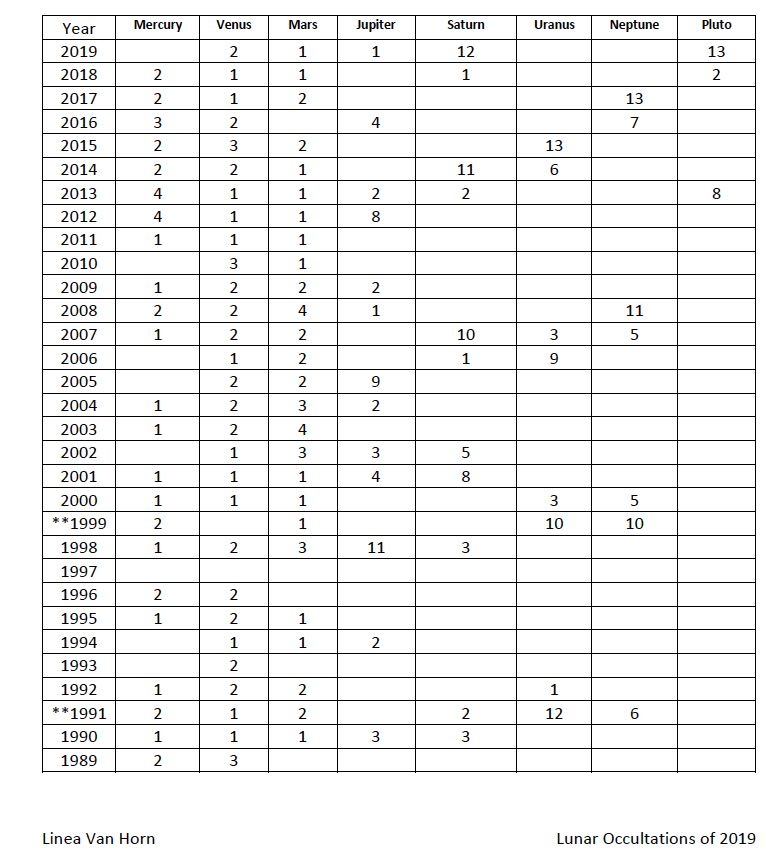 These numbers confirm that we’re looking at a highly unusual situation in regards to lunar occultations in 2019, both in terms of numbers, and in the way that Saturn and Pluto in Capricorn are highlighted repeatedly in a short amount of time.

Unless you’re just crawling out of some sort of astrological time warp, you’re aware that Saturn and Pluto will conjoin in Capricorn in January 2020, at this point only a year away. They’re already, as of this publication, within ten degrees of each other. There’s been lots of handwringing and dire projection about what the union of these two Big Boys will bring ii. Entire conferences have been devoted to the subject. There’s certainly been general agreement, with Pluto in Capricorn, that the business and government sectors will undergo profound and probably reactionary, conservative developments that could threaten their very foundation. Now Saturn sweeps through with its tendency to solidify things. When these two are in contact, serious things transpire.

In January 2020 when they conjoin, Saturn and Pluto will be at their “New Moon” phase or the birth of their newest iteration. Right now, however, they are still in their balsamic phase, the final and “most mysterious” phase of the eightfold cycle. Georgia Stathis, in her 2018 book Pushing through Time, describes this phase as feeling ragged and disjointed, but crucial because this is where “ideas (for the next cycle) are incubated and formed”iii. She goes on to provide an historical exploration of the Saturn-Pluto cycle in regards to finances and economics. She describes how, during the balsamic phase of the last several of these cycles, secret high-level meetings occurred during which the economic rules of engagement for the next cycle were established and consequently implemented.iv This very thing is probably going on right now, unbeknownst to us.

Clearly, most of us are not privy to the workings of the clandestine deep government. We have a more limited field of play. Nonetheless, we can participate where possible with the principle of “seeding” to transform and elevate the expression of the sign of Capricorn altogether. The counterbalance to nefarious goings-on may turn out to be more important than we recognize.

It must be pointed out that this small, unique series of occultations occurs within a far grander “reclaiming” context. Several larger processes provide a rich background and relative time scale in which to parse this immediate experience. These include but are not limited to:

1) Changing of the Ages shown by the alignment of the Capricorn axis with the Galactic Center. This hugely impactful but largely unheralded milestone in the precessional process is occurring during our lifetimes and is far easier to define and observe than beginning of the Age of Aquarius. For more information check out the work of Daniel Giamario who was among the very first to recognize the significance of this celestial event.

2) The shifting of the star Regulus from Leo to Virgo in 2011 after more than 2,000 years. Its entry into a feminine sign, due to precession, offers a new field for expression for this Royal star long known as “the kingmaker”vi and is a potent indicator of a change in what we are looking for in our leadership. Michael Lutin calls this “The Age of the Common Woman.”vii And it’s just beginning!

3) Pluto crossing the ecliptic in October 2018 for the first time since 1931. A planet on the ecliptic is on its node – the karmic harbinger of the life cycle. Pluto won’t cross its node again until 2179. Oddly, I didn’t learn about this in an astrology article, but in an EarthSky astronomy newsletter. Amusingly, the author grasps the importance but misstates the alignment: “In fact, on January 11, 2019, when Pluto will lie opposite the sun in Earth’s sky (sic – it is a conjunction not an opposition), the sun-Earth-Pluto line will be so close to perfect that the sun will sit directly in front of our planet Earth from Pluto’s vantage point.”viii And of course the reverse is also true: The sun will sit directly in front of Pluto from our point of view, too! To reiterate: this will only happen twice in Pluto’s 248-year orbit, so for it to occur in the same year as this series of lunar occultations is something special and should get our attention. There’s a resonant event on July 16, 2019 with the Cancer-Capricorn lunar eclipse when the Moon occults Saturn and Pluto on the same day.

With the perspective of hundreds or even thousands of years, the series of occultations in 2019 may seem like small potatoes. However, it’s something right in front of us that we can utilize consciously to transform what we choose, understanding that we won’t see the results right away. From small things do big things come.

Capricorn is known as the sign of the patriarchy but I believe Capricorn is much bigger than that. In fact, my hope is that we will consciously use this seeding energy to transform, elevate and manifest far better qualities of Capricorn. This regular eclipsing of Saturn and Pluto by the Moon invites us to work with this energy, bringing it from the unconscious domain into awareness and manifestation. If these two “super powers” are at the winter point of their cycle then this conjunction in Capricorn provides a fertile field. It is after all a feminine or receptive sign. The regular occultations of the Moon here are like a gentle rain, softening the soil and bringing needed nutrients. The fertile Moon comingles with the destroyer and the rebuilder, creating the primordial mud from which the new shall emerge. They prepare the vegetable garden by adding compost to the soil, getting it ready for next year’s crop. The balsamic phase is not only the ending of the old, but also the beginning of the new.

One thing we can expect to emerge in this New World Order is new leadership. In his Forecast 2019 (his 43rd consecutive annual forecast of financial astrology), Ray Merriman comments “We are on the threshold of such a monumental change. With that usually comes new world leaders. They become defined as great by resolving the problems of the time they inherit. Additionally, they construct benefits, create inspiration and an environment of hope that uplifts the collective. With a newfound sense of confidence, anything becomes possible.”ix

Here is a simple exercise that anyone can do to participate in this rare opportunity, and I invite and encourage you to do it. Every time the Moon transits Capricorn and occults these two powerful planets, visualize, meditate and plant the seed of the highest expression of Capricorn energy.

One idea, for example, is to repeal patriarchy and replace it with the Native American concept of the Circle of Grandmothers. In its best expression, this is a consensus paradigm, with enough structure to provide cohesion but not hierarchy. These elders – whatever their gender – have the following qualities among others:

You probably have your own ideas of what a more enlightened Capricorn would look like. Run with it! The more people who push this thing along, the better. The most important thing is to recognize and use these monthly occultations, embedded in far grander processes, to thrust the seeds of your vision deeply into the enriched soil of this most material sign. Who knows when we will again have such an opportunity to manifest a higher reality in the sign that has mastered manifestation!

Join me in reclaiming Capricorn. BE the Circle of Grandmothers!

Thank you for reading. May all be auspicious.

i More accurately, an occultation is visible from certain places on earth. Areas of visibility are listed in Jim Maynard’s Celestial Guide calendar, and also on the U.S. Navy’s Astrological Almanac http://asa.usno.navy.mil/SecA/olist19.html. To change the year, simply take out the “19” in the URL and replace it with the two-digit number of the year you want to check. It is current through 2019.

ii Don’t miss Sam Reynold’s article “Why You Need to Stop Being Afraid of the ‘Bad’ Planets.” https://www.astrology.com/article/why-you-need-to-stop-being-afraid-of-the-bad-planets/

Thank you for reading. May all be auspicious.