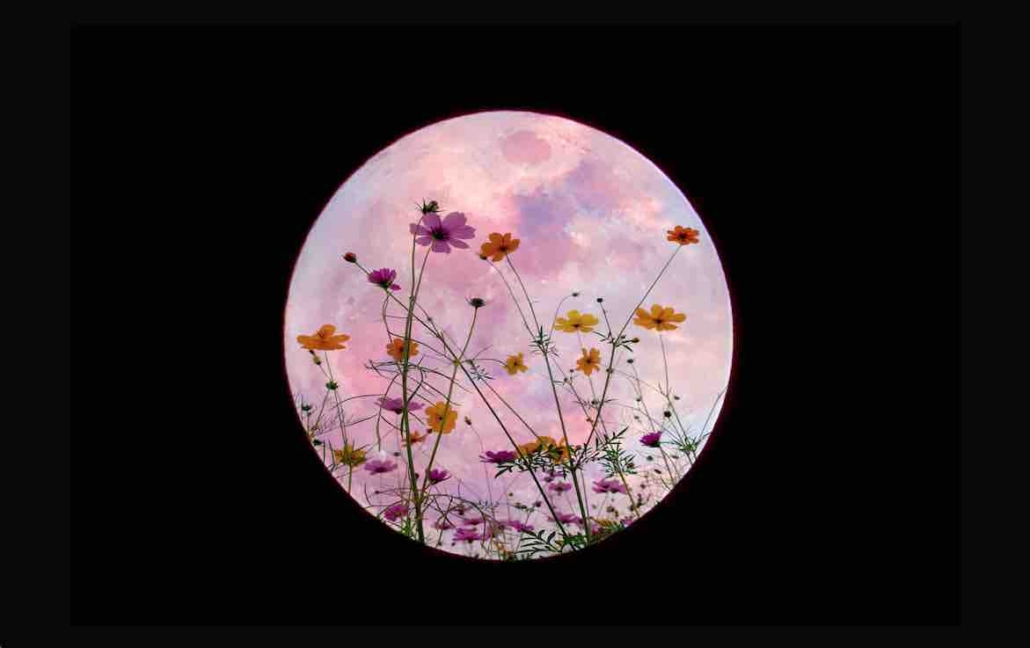 “The mind is like a parachute: it doesn’t work if it isn’t open”

A favourite airy quote for the curious and versatile, free-thinking and usually fast-wheeling Gemini, the zodiac sign of the Twins, through which the Sun now traverses, suggests maintaining an open mind, and having someone to talk to, is essential to have any perspective of time and space – particularly now during the Full Super Moon Total Lunar Eclipse, aka a ‘Flower SuperMoon’ in the Northern Hemisphere, and ‘Blood Red Super Moon’ as visible in East Asia, Australasia, Northern to mid-west America and Canada, plus the southern tip of South America.

This fantastically named “Flower Blood Super Moon Total Lunar Eclipse” begins totality at 11:11UT and ends at 11:25UT. And while that might seem a fast culmination, the whole eclipse begins at 8:45UT and lasts a leisurely five hours. Check your time zones to tune into a magic number that opens a magic portal…

Before we cross the heavenly guarded entrance and go through this rather amazing stargate, it is worth noting up top how the witty and light-hearted Gemini Sun is in the home sign of its’ quick-thinking planetary counterpart, the heavenly messenger, Mercury. Note also how Mercury is in his own domain in Gemini and slowing down right now (to go retrograde from 30th May – 22nd June – SOLstice!), making the next few weeks an excellent time to look back, revise, and rethink certain courses of action – with an open mind. Check where the mutable and multitalented 5°-11°Gemini Sun and Sagittarius Moon align in your chart to see where you are most receptive to the kind of change that goes easily with the flow – and can still hit a bullseye!

☆ A thrice-yearly Mercury Retrograde is always time to re-jig, re-focus, and review, which often means facts and figures, contracts, and anything specifically concerning buying and selling, health, news, and any associated information, will require double-checking with extra patience. Artful Mercury is also with loving Venus AND the destiny-fulfilling Ascending Lunar Node: thoughts of peace, connecting with friends, loved ones, and all kinds of fun-packed socialising can pacify any anxiety and nervousness to generate the beginnings of a deep and calm recovery through what is essentially a time of historical collective confusion and trauma. During such moments, the trick is to stay informed but not get sucked into past obsessions or future pipedreams, whatever they may be. The freedom to understand the true nature of reality beckons, all-the-while the astral advice is to remain open-hearted and friendly towards everyone we meet.

☆ Looking at the night sky from a broader spiritual perspective, this Full SuperMoon also has the potential to activate immense female ‘Shakti Power’ with a powerful female ascension due to an impressive ‘Royal Star’ alignment with an Esoteric ‘Mutable Cross’ that stimulates a deeply feminine aspect of our innate human psyche called ‘Love-Wisdom’ (Yes, guys have it too.), which awakens our ‘higher’ mind’*.

As these Fixed Royal Stars shine with ‘The Lights’, Sun and Moon, they will also include the eclipsing nodal axis, in a tight 90° square to Jupiter, the astrological pantheons’ Sacred Guru, the wise and magnanimous teacher, and asteroid Vesta, youthful Goddess of the Hearth and home, so symbolic of growing one’s inner-light.

This, therefore, is a mighty strong Full Moon Lunar Eclipse (and last supermoon of the year) with a very rare kind of ‘T-Square’, primarily because all three planets (Sun & Moon, Jupiter) are closely conjunct highly influential ‘Fixed Royal Stars’ that are also known as ‘Watcher Stars’ or ‘Guardians of the Whole Sky’. The fourth ‘Watcher Star’ constellated Luna as she waxed towards the honourable Virgo Vesta a week before the Full Moon, igniting the heart-fire within this eclipse. A long-held understanding of the Majesty of the four stars comes from ancient Persia’s priestly stargazers.

And just as this eclipse spotlights our human dualistic nature and therefore the shadow within, which is the very same part of ourselves we often disown, transfer and/or project, can now be seriously encouraged to step into the light of consciousness because ‘Fixed Royal Stars’ are universal heavenly guides, like Archangels that guard the mysteries of heart and mind, spirit and soul. All four ‘Watchers’ also come with a major quest, where the challenge to keep one’s moral integrity scrupulously intact under any circumstance (no matter how tempting a slick Gemini style superficial short-cut get-rich-quick scheme, or the slippery silver-tongue of a lying, cheating second-hand car-dealer). Royal Stars dictate success only really comes when we rise to high ideals and remain honest and ethical, having utmost faith in compassion and kindness, and one’s heartmind fixed firmly upon the good of all.

From this astrologer’s point of view, it is remarkable to note how the four guardians of heavenly stargates quite wonderfully now reveal the way into a celestial mandala – a magic circle – with both Lights (Sun & Moon) and Sacred Guru Jupiter to make this a compelling Full Super Moon. As all four ‘watchers’ energize this deeply illuminating lunation that culminates in the Full Flower Blood Super Moon Lunar Eclipse (and also celebrates the (birth) life, enlightenment and mahaparanirvana of the historical Sakyamuni Gotama Buddha).

Lighting up our stargate portal at the waxing First Quarter Moon, May 19th, Luna conjoined asteroid Goddess Vesta to ignite a spark of courage with noble Heart-Star, ‘Regulus’, the ‘Watcher in the North’ reminding us how success is never possible if one acts with vengeance. Also during this intensely fascinating Lunar Eclipse, the Heart-Star radiates towards the generous wisdom teacher, ethical Jupiter, which closely conjuncts another Fixed Royal Star, ‘Formalhaut’, nourishing ‘Watcher in the South’.

And because expansive Jupiter is the ruler of the Full Sagittarius Moon, also now in his traditional home of the all-encompassing, oceanic Pisces, Jupiter wields a vastly magnetic and inspirational, almost hypnotic potency over this Full Super Moon. In other words, Jupiter’s magnanimous blessings abound (at least until Solstice June 21st, and possibly up to the end of July for those who resonate with early degrees Pisces). Plus, with the aid of the Royal Watcher Stars, Jupiter now in T-Square to the Sun and North Node, and the Moon and South Node, it affords a clearer overview that indicates our quest is one of positive karma ripening and accomplishing spiritual growth goes extremely well when we keep lofty standards in place and our conduct imperative and pure; yet still show forgiveness if and or when baser human instinct overcomes honesty and decency.

Jupiter’s magnanimous influence also bestows confidence, with high hopes that a fragile ego can easily inflate; so, we also need to watch expectations to avoid any disappointment. But supporting this truth-seeking, consciousness-raising Sagittarius Full Super Moon Lunar Eclipse is our emotional connection to our past (life karma). Being honest about feelings, past slights, or perceived sensitivity (especially within familial relationship) is not always easy: to get to the heart of unvarnished truth we often wade through all kinds of emotional buffer zones that have their own triggers and dangerous distraction.

Yet now is the time to release past (life) obsessions, fixations and negative thought patterns and habits, through the Dragon’s Tail, aka Ketu, the karmic South Node; at the same time accenting helpful traits and associates brought forward into present conditions – all this with the help of an intense concentration of Fixed Royal Stars. Wondrously, the South Node now conjoins ‘Antares’, “Watcher in the West”. Thus, scarlet star Antares, the Full Super Moon, AND the karmic South Node also face Sol and the North Node, aka the ‘Dragon’s Head’ or Rahu, and, would you believe, the ‘Watcher in the East’, Fixed Royal Star ‘Aldaberan’, another bright red star that encourages focus with intent, and to empower oneself and others valiantly and consciously, with courage, care and insight. As with all portentous Fixed Royal Star, should we choose to deny the challenge of this evolutionary moment then one would spectacularly fail. Bare in mind that if ventures don’t work out the way we planned, at least there will be a valuable learning experience. The choice, as always in this dualistic world, is yours.

This Full Moon Lunar Eclipse is the Metal Ox Moon moment when all four heavenly guardians illuminate the direction to take towards our own propensity for enlightenment. Be aware that many new and novel possibilities are being presented, with more on the way with the New Moon Solar Eclipse June 10th, on route to Solstice – another natural turning point when Mercury goes direct, and Jupiter stations retrograde for a longer reflection upon our collective future just as communicating ideas gets the green-light to go forward.

Until then ~> lightly onwards, into the centre of the sacred celestial mandala keeping the metaphorical parachute-mind open,
with Love & Light

& Agent #87 at the Cosmic Intelligence Agency

* If practicing any breathwork, meditation, yoga, especially Kundalini Yoga, please do so under guidance and supervision.

“When you realize that all that appears and exists to be your mind, there is no path of enlightenment apart from that.”