Travelling to the heart of this ancient land, which holds the oldest living culture on the planet, is a journey to the heart of ourselves…….Thanks to our agents on the ground, Agents Pi,  Omega and 96, we will be privileged to sit with traditional owners who will generously share their wisdom with us, tell us stories and take us on a journey to sacred sites.

The 2014 C*I*A Agents*In*The*Outback*Star*Camp was star-studded, adventurous, soulful and a truly life-changing experience. Planned to maximize star gazing possibilities (incorporating the dark of the moon and New Moon and good weather), reflections on the opening chart for this event accurately forecast big adventures.  Jupiter was on the Midheaven, exalted in Cancer in the 9th House, trine Mercury in Pisces and Sagittarian/Jupiterian agents were out in force. With the Ascendant of the opening chart (16 degrees Libra) on the C*I*A’s natal Jupiter and retrograde Mars in Libra falling in the 1st house, this truly was an Outback adventure with a difference, an inner cosmic journey that I am confident changed mine and many others perceptions and perspectives. http://www.cosmicintelligenceagency.com/2013/08/star-camp-2014/

After being warmly welcomed on collection from the airport by Agent 77 (Marg Murphy), the early evening began with a welcome, an opening ceremony and an introduction to the Shamanic journeying. This set a magical scene inspired by Patricia’s (Patricia Walsh- Agent 999) observations of the trees, Aboriginal ancestor spirits and journeying to the sky. Our first introduction to the sublime food created throughout the event by Peta, a professional chef from Melbourne, was to follow and I was in seventh heaven sitting around the campfire that night.

While we slept in swags directly under the sky we were reassured that there were no bugs, spiders or snakes (although there may have been a touch of ant dreaming). I have only rarely in the past felt confident about sleeping under the stars (apart from a brief sojourn in a hammock in Mexico some 35 years prior). My hesitation has centred on a fear of snakes and other animals, not to mention the connotations of Wolf Creek being just up the road. To have that opportunity with lots of reassurance about the safety of the place and to be accompanied in my torch lit journey to bed by the gentle snoring emanating from the field in which all our swags were co-located was amazing. 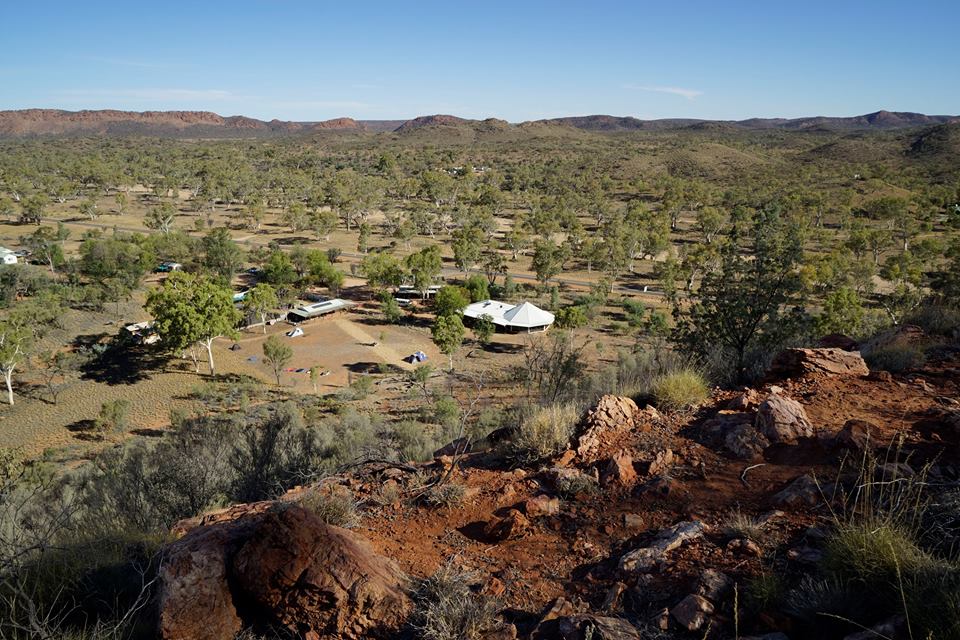 The night skies were truly awe-inspiring. As the flyer on the website noted “Here the Milky Way, Arakwe in the Arrernte language, is as bright and magical as you will ever see it”. At 3am in the morning of the first night I saw what I presumed to be a UFO –after all it appeared as a very bright star surrounded by a red and green rectangle with two pairs of isosceles triangles at each end and it was bopping up and down on the horizon as if to invite attention.  My more astronomically inclined swag neighbor, agent 12, Julija Simas, soon had this otherworldly apparition pinned as Canopus – the second brightest star in the sky. This was confirmed by Andrew the local astronomer (son of Zim the magician) who came the next night to tell us stories about the night sky.  I was amazed to learn that this not an unusual manifestation of  Canopus setting. Andrew had a special license for his laser pointer which stretched five kilometers and made it easy to point to Jupiter and Mars. He had another surprise for us when the International Space Station appeared over the horizon, looking like another bright star. However this light journeyed from one side of the sky to the other in about five minutes.   While the sky at night was alive and pulsing, early risers at Honeymoon Gap could rely on a special wake-up call from Venus just a few hours before the Sun.

I had read that the sabian symbol for the Sun in the 7th degree of Aries(the Sun degree for our opening chart) is “is a man expressing himself in two realms at once”. This whole journey did indeed feel like enjoying the best of both worlds. I can also testify to the validity of the prediction that the Moon Venus conjunction in the 5th house in the event chart signaled that the experience would reward everyone profoundly – while also being a lot of fun.

Every morning Agent 333- Cristina Murata offered us a wholesome start to the day with gentle stretching yoga.

The workshop that began on day two and was mostly held in a beautiful octagonal workspace was led by wise beyond her years Patricia Walsh (Agent999 from Florida). An expert on past life regression and astrology, Patricia took us on a shamanic journey through the zodiac. I sensed that many of us moved relatively swiftly through the initial skepticism of feeling like we were ‘making it up,’ to experiencing profound and sacred  internal healing that connected us more closely with this magical and timeless land in the red centre of Australia.  I found Patricia’s shamanic journey extraordinary – from touching on deep grief about the recent death of my little sister when we were exploring Cancer, to an especially powerful in my body strong spine moment – with all the confidence and groundedness that it implies – when we were journeying through the sign of my North Node, Capricorn. 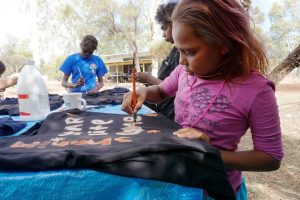 A memorable Sacred Sites Tour led by Agent 96, Doris Stuart, a traditional owner and the keeper of sacred sites in Mbarntwe (Alice Springs) perhaps left us a little shocked at the cultural blindness of non-Aboriginal Australia to the sacred nature of the land . Doris generously shared her stories and opened her heart to welcome us to her country.  Arrernte women MK Turner (a renowned author and cross cultural worker) and her daughter Amelia, a nungkari (traditional healer and painter), introduced the group to dot painting – an exercise which resulted in many colorful artworks. 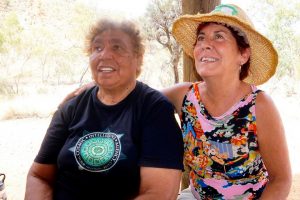 After experiencing lots of fire, earth and air in the initial days, on the fifth day we travelled 100kms or so to indulge our parched bodies in the water of Ormiston Gorge in the Mac Donnell Ranges.  This was a great opportunity to settle the emotional waters that many of us were overwhelmed by in the course of the shamanic journey.

On our last morning we visited the nearby dry river bed of Honeymoon Gap with local community artist, Alison Hitman, Agent 888, creating a grand sand mandala and farewelling the fabulous group experience.

A strong group cohesion was driven by our common interests and inspired by the care and consideration shown by the creative agents behind the event. Although a little group shy, this was one of the best experiences I have ever had of a group and the trust level was high.

This Star Camp was incredibly well thought out and created a really good blend of workshop, star gazing, being with the Aboriginal elders, a day at the gorge, lots of good food and the wonder of sitting  and singing around a campfire at night under the stars.  Poetically just after we left it started raining,

Watch our Star Camp Video, made form picture os 2011 and 2013 Star Camps! set to our theme song of [email protected]!