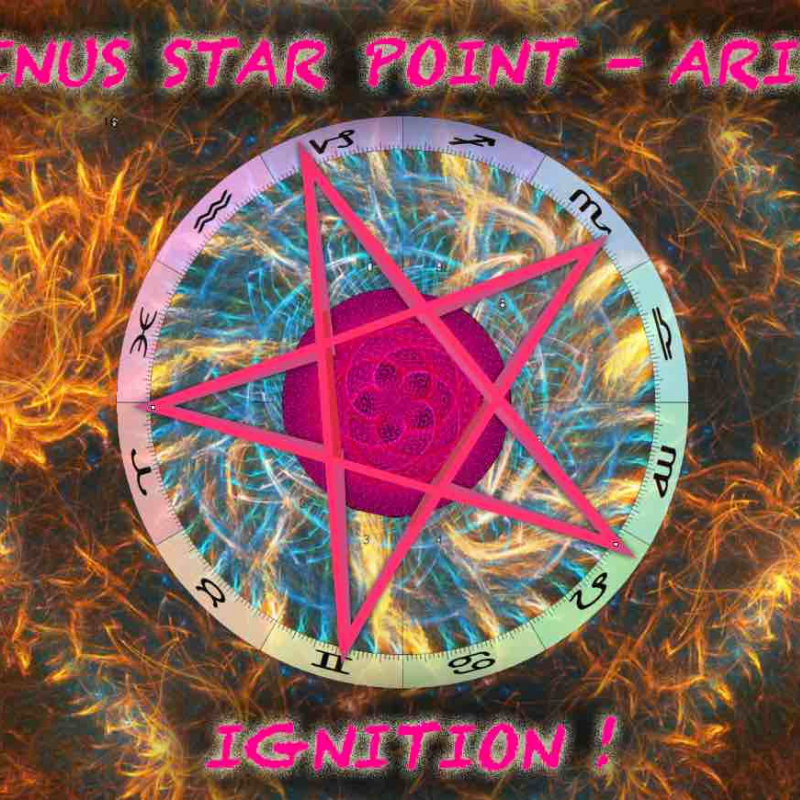 Receive link to view/download after purchase!

Venus Star Aries
Explore and discover more about Venus, her cycle, her cosmic rhythm and divine dance, as she makes her next retrograde and star point in Aries. For  this webinar we have  gathered 3 dedicated Venus Star practitioners, who share their findings with you, showing you how to work with Venus and her cycle. Venus’s Starry Points are confirmed in our heavens every 9.5 months, tracing a pentagon through the zodiac every 4 years and pentacle in the zodiac every 8 years.

The Cosmic Rhythm of the Venus Star – with Julija Simas
Each retrograde of Venus, often seen as an isolated event in astrology, is best viewed and understood as part of a larger cycle that includes the makings of the Venus Star in every astrological chart. Learn how to follow and use the Venus Star as part of this bigger cycle, repeating in patterns of 9.5 months, 1.6years, 4 years and 8 year cycles. By using and understanding the workings of the Venus Star within your astrological chart, one can tap into a divine, natural and co-creative rhythm that is embedded in your life. In this part of the webinar, Julija presents to you how to plot the Venus Star, follow your Star from your birth and into the future, giving you insights into the co-creative spirit of Venus as the cosmic fractal flower unfurls endlessly in your chart. This part is now Free on You Tube, Therefore the price below has been adjusted! https://www.youtube.com/watch?v=FVZd3leV28Q

The next Venus Star Point: March 25, 2017 at 5 Aries – Arielle Guttman –
Every eight years Venus completes two pentagrams over the zodiac. One is the Morning Star (MS) penta and the other is the Evening Star (ES) penta. These star points are derived from the moment the Sun, Earth and Venus reach maximum partile conjunction (or cazimi). This next one is in Aries and it will be the Morning Star. There will in fact be three passes of Venus over the Star Point degree in the next three months.

This gives a three-month window to incorporate the meaning of this particular VSP into our lives.The new Aries Star Point will be a Morning Star, which last occurred eight years ago at 7 Aries. The Evening Star Venus occurred four years ago, in 2013, at 8 Aries. So the areas of your chart that are most sensitive to this are 4-8 Aries or 4-8 Cardinal, where Venus’ message will be felt most intensely.

What are some of the characteristics of an Aries VSP? If you were born with this placement, you are someone who sets out on the journey of life to discover yourself most fully. It describes the archetype of the hero, soldier, adventurer, rescuer or leader whose mantra would always be: I did it my way. But young-ish, even when mature, this Aries VSP retains its youthful spirit. The “Hero” motif, most importantly, because these are the youthful spirits that are bold and visionary and take it upon themselves to pave the way forward.

The Aries VSP periods are times when any one of us might feel motivated to lead the charge. Because of this, and because of its degree and phase this year, I have named it the Year of Passionate Activism. There will be a lot of screaming mouths, like babies, all around us. How do we try to contain it and can we contain this fiery, warrior-like energy of Aries, as it continues to play out through 2017?

The 584 day Cycle of Venus and the Descent of Innana and when does it begin? – Gemini Brett

As the Aries  retrograde Venus point begins a new cycle of Venus, Agent 1123, Gemini Brett will transmit the greatest starry story ever told:  The Descent of Inanna, Queen of Heaven and Earth, into Erishkigal’s underworld Kur for death and rebirth.  This enlightening StarryTelling astronomical presentation will clearly show how the Sumerian tale of old follows Venus’ 584-day Synodic Dance with Earth and Sun.  The 40 days and 40 nights of Venus’s retrograde is often misunderstood as the Descent of Innana into the underworld, yet the with the retrograde Venus only disappears for about 10 days.

In this segment Agent 1123 will introduces you to discover one whole Venus cycle, you will be introduced to the Planetary cast who play the roles and set the stages and, most importantly, you will be given the keys to utilize the sacred timings of Inanna’s descent and rise in Earthly skies for profound personal growth in the next round. Since his first Venus initiation with Daniel Giamario’s Shamanic Astrology Mystery School, which unearthed this ancient practice, Agent 1123 has devoted countless hours towards the Archetypal Ascent and Descent of the Global Goddess.

We plan to continue these Venus Star online events every 9.5 months, bringing more information about Venus her cycle and phases with different astrologers at every Starry turn!

Stay on top of the information presented with this first in our series!

Upon purchase receive  a link to download the information, PDF’s, Venus Star ephemeris, and the next Venus cycle key dates and stages.