Nov 28th 2011 * The fixed Star Regulus moved into the sign of Virgo after 2160 years in the sign of Leo. This bright star has been known as the King maker, the star of heroes bestowing honours and fame to those linked to the prestige of Regulus, it also comes with a warning that money doesn’t necessarily bring happiness.

” Regulus, a Little King, and often called Cor Leonis, the Lion’s Heart, and symbolically the Crushing Foot. It was one of the four Royal Stars of the Persians in 3,000 B.C., when, as Watcher of the North, it marked the summer solstice. [Robson*, p.194-195.] It gives violence, destructiveness, military honor of short duration, with ultimate failure, imprisonment, violent death, success, high and lofty ideals and strength of spirit, and makes its natives magnanimous, grandly liberal, generous, ambitious, fond of power, desirous of command, high-spirited and independent. [Robson*, p.195.]

Regulus is one of the four Royal stars that sit close to the ecliptic which have been the markers of the four corners of the zodiac for millennia. These four Royal Stars used to grace the fixed signs of the zodiac, Antares – Scorpio, Regulus- Leo, Formalhaut- Aquarius, and Aldebaran Taurus, but as the signs have since moved out of alignment with the original constellations they are associated with, so have the stars embedded within the constellations. Fomalhaut is now in mutable Pisces at 4° , Aldebaran is in Gemini at 9°,   Antares is now at 9° Sagittarius and Regulus now at zero Virgo.  Antares and Aldebaran exactly opposite in the sky, shifted in about 1300 CE, as universities began to be established in Europe and the UK, and much hidden  information resurfaced from the Dark Ages. Fomalhaut shifted to Pisces in 1725 CE, with the Scientific Revolution when new paradigms in science shifted our perception of God, the universe and everything. Now in this modern age Regulus in Virgo is certainly a sign of the times, shifting global focus, perception and awareness.

For more info on the meanings of the fixed stars please visit  http://www.constellationsofwords.com/stars/

The shift of these royal stars from fixed to mutable signs is based on the tropical zodiac which moves 1 degree backwards in the zodiac every 72 years. This is known as the Precession of the Equinoxes. Tropical astrology as it is called,  a popular western astrological method, and what we use here at the C*I*A, begins the zodiac at zero Aries when the Sun aligns with the Equinox point as the Sun ingresses into Aries on March 20-21st every year. From this point 30 degrees of each of the 12 zodiac signs follow. A an informative article you can read here : helping you to understand signs and constellations and precession.https://cosmicintelligenceagency.com/the-zodiac-and-why-there-are-12-signs-not-13/

In this day and Age of Astrology and as Agents of Astrology,  it is important to know the difference between – the 3 types of Zodiacs, the Tropical, the Sidereal and the Constellations the Three Zodiacs. 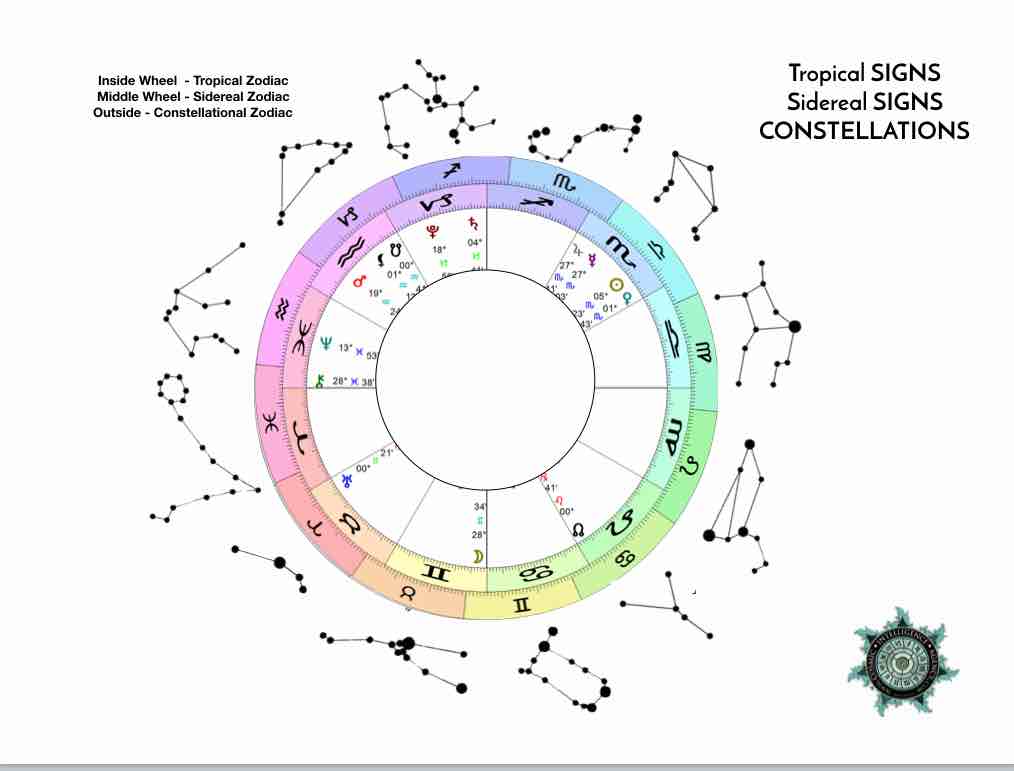 With Regulus’ move into Virgo, it seems so appropriate and timely as we consider a world ruled by powerful elites and societies ruled by money and power. Now we have Regulus move into the sign of service, resourcefulness, technology, skill and duty, as we consider waste, global resources, efficiency and how to get things working better, and even new currency. This shift seems timely to say the least.

We are all called to a service of some kind,  helping to shape a better world. Bowie’s words “We can be Heroes!” comes to mind.

Leo is a Fire sign ruled by the Sun and Virgo an Earth sign ruled by Mercury. The shift from one to the other brings with it a new focus, a new energy. From Leo to Virgo Regulus won’t change his spots, what it stands for or what it means, but it will have a new influence. Virgo is the new field playing filed, but Virgo doesn’t really like to play much, only for a reason. Virgo not being a playful sign, will make sure Regulus is more focused on perfecting what is good, and dismissing anything that is wasteful. Virgo, ruled by Mercury indicates a lightening up from material dependence and resources, and also accentuates the need for efficient and clever management of global resources and the economy. The recent rise (2017) of cryptocurrency  is certainly showing now. We move from an agenda of greed, power seeking, gold digging, ego consciousness, megalomaniacs concerned with their own greedy agendas to a focus and elevation of those who adapt an attitude of service and healing to the sacred planet and her precious resources, decentralising banks and their power.  What is now required is a giving, purposeful and universally aligned attitude to the world around us. We have used our Earth as a playground for long enough, and Virgo energy now wants us to pay much more attention and respect to that which we take for granted and that which has become dangerous and destructive.  Regardless if we consider “Climate change” to be a fabricated control tactic or not, or climate change being just a cyclic phenomena, should we continue to deplete the planet of her natural resources and continue to mindlessly pollute the the world around us ? Virgo like Pisces and Gemini, two other mutable signs, are  signs that are super sensitive to the environment they find themselves in.

Those who learn to adapt an attitude of service to the sacred, the healing of planet earth and her precious resources will be the new heroes of the next age.

This shift  is accentuated also as Regulus opposes Neptune and Chiron which it will do into 2014.  Neptune at zero Pisces is another indicator of  the changing of the old guard, moving from ego centred rulers to those more attuned to collective and universal needs. Fixed Stars are only really considered if they conjunct a planet, but the opposition to Neptune  at this time seems quite significant and hints at the uncertainty of what exactly comes next or with this new age. Regulus remains at zero Virgo for 72 years, but Neptune is opposite only up until 2013-14. We are not assured of what exactly comes next, what sort of leadership we are looking for or  who will rise to the new standards being set by collective intentions.

The chart above is a symbolic reference of the shift of Regulus into Virgo an indicator of what this shift may be about. When the last Leo era of Regulus began in 157BC(source Solar Fire software) it is hard to pinpoint anything highly significant, but what is noticeable is that the Roman Republic, a very patriarchal Leo like society was gaining strength and power,  and became the major influence in the development of the western world, a template which has been used since in our democratic world. Some interesting things happen not long after this shift however, when a waning Pluto squares Regulus, Julius Caesar is born.  When Pluto conjuncts Regulus,  Octavian his predecessor,  is given supreme power by the senate. Neptune’s connections to Regulus seem to correlate with the transition from Republic to Empire and Caesars death and the death of Christ correlates to when Neptune opposed Regulus in 33 ACE.


A shift is definitely on the way, it has been building and will continue over the next decade and beyond, therefore a particular date may not be a great significator, but it is interesting nevertheless to consider the chart above. Mercury is retrograde in Sagittarius. Are we re- considering our drive to conquer the planet? Are we re-looking at what the future holds ? With Venus close to Pluto and square Uranus we can already sense the power of the Pluto Uranus square building and what it is  bringing with it. With Venus here a representative of  our” Global Value System”, what we want and value, what we attract into the world around us and how , become highly significant. Are we creating more greed, gluttony, envy, avarice, sloth, pride or love, peace and harmony. This seems  much more significant than the coming of an “Age of Aquarius”.  If we use the tropical zodiac, the Age of Aquarius would only start when the precessed equinox point, zero Aries, moves into the sign of Aquarius, which is currently at 5 Pisces,  for this point to move into Aquarius, we still need to wait another 350 years!

Another interesting symbol of this great shift in consciousness, priorities and needs stems from the Mayan creation stories telling of the end of this Age. As the complex calendars of the Mayans end in 2011 and 2012, these creations stories seem to very much reflect  the shifts we are experiencing right now and which will no doubt become more intense over 2012 and into 2013. Mayan mythology tells of the fall of Seven Macaw, a corrupt ruler who has ruled this last Age of Man. He is avenged by the twin Sons of one Hunaphu, a Sun deity who is rightfully restored to his place by his twins sons. The image is that of ego consciousness being restored to universal consciousness.


Ask yourself what your service will be as the changing of the Guard takes place. What will be your sacred service, your role in the healing and health of the planet? Everyone is called to take responsibility and play their role as we change our minds about what’s most important in this world.

Those who learn to adapt an attitude of service to the sacred, the healing of planet earth and her precious resources  will be the new heroes of the next age.

* according to Solar Fire software calculations.Although divisions of the constellations cannot be exact,  when using the tropical zodiac of all signs being 30 degrees each, this is the timing for this shift of Regulus to Virgo.

Addendum: As this was written in 2011, it is worth adding a few extra notes. For Leo rising Donald Trump with ASC at 29°20′ ,Trump is born with Regulus conjunct his ASC. Here we can see an individual that embodies the negative characteristics of Regulus. In early August 2016 Donald Trump’s progressed Sun moved  from Leo to Virgo after 30 years. He was born a Gemini with Sun at 22°55′ in 1946  on June 14th. Now 70 years old, his progressed Sun has moved to Zero Virgo. During 2017 the Great American eclipse which occurs at 28°Leo will be in aspect with Regulus and Trump’s Ascendant, an eclipse series that relates to eclipses of 1963, as eclipse Saros cycles repeat every 18 years and 11 days, we look back to 1999, 1981 and 1963 and 1945.

The C*I*A, is very fortunate to have our natal birth Sun at Zero Virgo as well!  Not a deliberate election.
We are of service in transforming the world through astrological thought, connections and healing.

Join the C*I*A membership for more insights from the dedicated Agent Team!