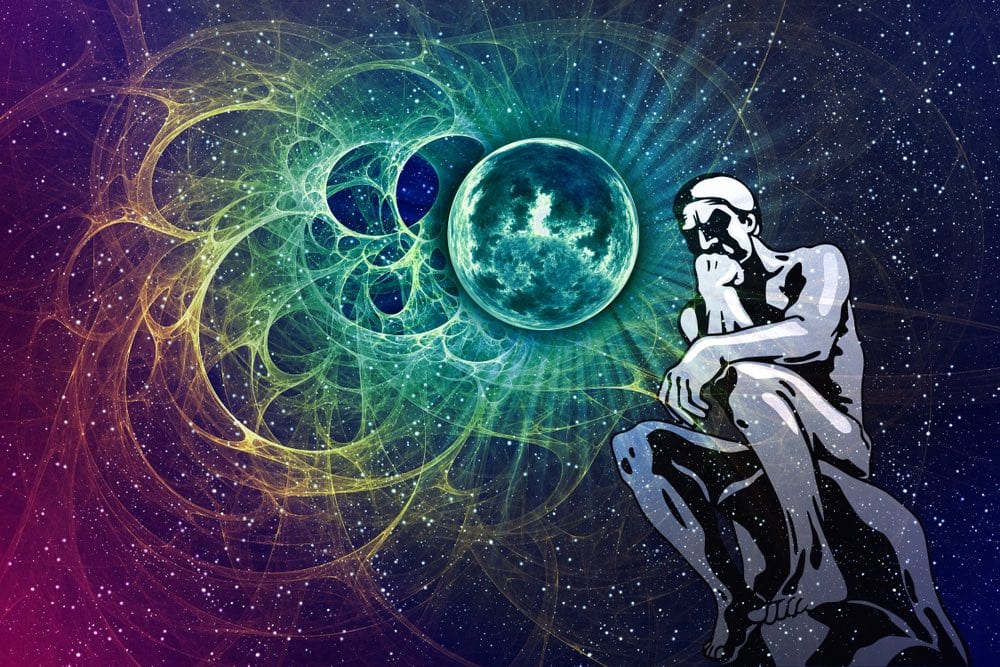 The wheel is turning and it’s saying to us `think your own thoughts; question everything.’ The nodal shift into the Gemini/Sagittarius polarity on May 5th/6th 2020 heralds a shift in consciousness collectively as it illumines specific parts of our individual charts.

Think of the lunar nodes as an emotional theme pulsing subtly in the background of the unconscious. Working on an eighteen and half cycle the lunar duo vibrates in a polarity for approximately two years. This means that the present global crisis began under the Cancer (home) Capricorn (authority) pairing. ‘Stay home’ orders to quell the virus spread have never been more universal.

The lunar nodes form the backbone of evolutionary astrology; rich in symbolism pertaining to destiny and karma. The nodes are not planets, rather points reflecting where the moon’s orbit crosses the ecliptic. The nodal axis presents a challenge; learn the new lessons of the north node while releasing the resisting energy of the south node.

Collectively when the nodes change polarity the zeitgeist of the times shifts as well. The nodal shift challenges us to find a balance between the following qualities: data versus dogma, curiosity versus declarations, many ideas versus one truth, learning versus teaching. In other words, a balance between our need to reason (Gemini) and extol rhetoric (Sagittarius). Both Gemini and Sagittarius are two sides of the same coin: thinking, ideas, knowledge.

Because the south node, or karmic position, is in Sagittarius, its qualities are most in need of scrutiny over the next eighteen months. Every sign is equal in its gifts and deficits. But when a sign is in its south nodal placement it acts up. For an individual this may suggest a past life wound. For the collective, the south nodal placement magnifies the sign’s shadow dimensions. Therefore, expect south node Sagittarius to trigger collective work through expressions of questioning the `company line’: the beliefs, rhetoric and rules of the establishment. Sagittarius is the archetype of the teacher/preacher one whose truth is absolute. Of course, any `truth’ rests on data and `facts’, which is Gemini’s domain. The ‘truth ‘is only as valid as the facts it rests upon. Gemini is the fact gather; the journalistic, the forensic cop, the lawyer. Sagittarius is the judge, the commentator, the agenda setter. Because Gemini will be in the north node a solution to this nodal shift will simply be believe nothing unless you question everything. Focus on the Gemini `fact-finding’ as we navigate this new cycle.

Gemini is cognition, curiosity, ideas, all under the umbrella of thought. Gemini is `the news’ and as such our news sources will be scrutinized as never before. The clarion call of `fake news’ is a truism which will be tested over the next two years. No longer are news operations `unbiased.’ In previous generations there had been legislation (fairness doctrine) preventing a monopoly of individual control of the flow of information. No longer. CNN, for example is under the AT&T and Time Warner umbrella. The 16 billion-dollar Rudolph Murdoch has a huge piece of the media pie: “Murdoch controls a media empire that includes cable channel Fox News, The Times of London and The Wall Street Journal. Murdoch sold most of Fox’s movie studio, FX and National Geographic Networks and its stake in Star India to Disney for $71.3 billion in March 2019.Murdoch’s son, Lachlan, runs the new Fox, which consists of its broadcast, cable news, business and sports networks”( https://www.forbes.com/profile/rupert-murdoch/#753b6d8fb1af)

Thinker beware! It’s not as easy to find the kernel of Sagittarius truth when all the `facts’ are homogenized.

Individually we will consider why we think as we do. Note where Gemini activates your personal chart. Are there thoughts you hold which no longer meet the muster test? How do you reach conclusions? Turn up the other mutable signs in your personal chart, Virgo and Pisces. Apply Virgo discernment and analysis to filter out `just the facts.’ Pisces reflects beliefs. During this nodal shift our deeply held religious (Pisces) and political (Sagittarius) beliefs can shift as the emphasis points to Gemini’s logical processing.

Why do we think what we think? The simple answer is because we have listened to and integrated information from trusted sources. The key here is `trusted sources.’ Our first teachers were notably our parents, then on we went into the socially constructed school system, and as adults we gleam our facts from news sources. This is the polarity of Sagittarius/Gemini:  Sagittarius wisdom gleamed from trusted Gemini sources. As we navigate the new nodal shift the collective unconscious will actively begin to question the source of information.

Gemini rules the themes of `everyday’ routines, schedules and the daily environment. The present virus crisis has created a universal displacement of normal life affecting normal perception of time and cognition. Experts note the higher incidence of depression:” Investigators also surveyed the public and people who have experiences with mental illness and found widespread concerns about the effect of social isolation or social distancing is having on well-being. They survey also revealed increased anxiety, depression, stress, and other negative feelings and concern about the practical implications of the pandemic response, including financial difficulties.
“The prospect of becoming physically unwell with COVID-19 ranked lower than these issues related to the social and psychological response to the pandemic,” the authors wrote.
The study, “Multidisciplinary research priorities for the COVID-19 pandemic: a call for action for mental health science,” was published online in the Lancet Psychiatry.”

In the present coronavirus crisis, we now live in a sea of data; contagion rates, death rates, all mitigated upon the frantic call to get `more people tested.’ Results seemingly change daily as more and more data is collected and analyzed to make sense (Sagittarius) of the pandemic.

Action, especially `social action’ depends upon facts and data. The powers that be—governments— are depending upon the data collectors—scientists—to gather information so that leaders can make `informed decisions.’ As the nodes shift so might our understanding be of the present virus crisis based upon `fact gathering.’

The nodes, like everything in astrology, is a cycle. The nodes’ move backwards (retrograde) along the ecliptic at a rate of speed of approximately 18.5 years. To understand the thinking/wisdom themes of the Gemini-Sagittarius polarity in effect from May of 2020 until January 2022 we will explore previous similar cycles. Prediction relies on previous description!

The last Gemini/Sagittarius nodal shift occurred in October 2001, immediately following the horrific September 11th terror attacks. Like clockwork, as the nodes shifted so did the mechanism of `getting facts’ in the form of the Patriot Act;” “Hastily passed 45 days after 9/11 in the name of national security, the Patriot Act was the first of many changes to surveillance laws that made it easier for the government to spy on ordinary Americans by expanding the authority to monitor phone and email communications, collect bank and credit reporting records, and track the activity of innocent Americans on the Internet. While most Americans think it was created to catch terrorists, the Patriot Act actually turns regular citizens into suspects.”(https://www.aclu.org/issues/national-security/privacy-and-surveillance/surveillance-under-patriot-act).

On the heals of the Patriot Act, was the formation of the federal `Department of Homeland Security’ which also emerged during the last Gemini/Sagittarius nodal shift. Under the Gemini `need to know’ the USA reacted with legislation which bristled at the heart of the country’s independent persona as reflected by its Sagittarius ascending sign. Sagittarius embodies liberty, freedom and travel depicted archetypally by the American `Cowboy’. During the next two years, with Gemini fact-finding dominant we can expect new legislation to emerge at the expense of Sagittarius themes.

One such initiative is already in place in New York State. Contact tracers will be employed to track the movement of individuals tested positive for covid-19. The stated purpose is to gather more facts and data: “Those 1,000 tracers are part of what New York Gov. Andrew Cuomo referred to as the “army” the state is hiring to reach out to individuals who are newly diagnosed COVID-19 patients. A contact tracer is “a detective, investigator, in the public health space,” Cuomo said during an April press conference.” (https://abcnews.go.com/Health/takes-covid-19-contact-tracer-nyc/story?id=70391242)

Can one even imagine a world without the internet? It is the ultimate Gemini tool as it offers the ultimate fact gathering too and thereby provides Sagittarius knowledge at our fingertips. During the last two Gemini/Sagittarius nodal periods the internet as we know it was born:

“1965: Two computers at MIT Lincoln Lab communicate with one another using packet-switching technology.

As we navigate the next two years, focus on Gemini in your chart to uncover the truth of your life. Utilize the polarity of dialectic thinking; rationality and logic, unemotional and fact filled. You will likely find the long-standing beliefs of your life shifting as its being challenged by what you uncover. Fact-find on the sources of your facts! Investigate every `word’ you read, and hear, and turn on your natural Gemini curiosity to believe nothing and question everything.

Here is a `cookbook’ style of astrological nuggets for your consideration. Apply your rising sign and your sun sign:

Aries: Think about ways to improve your everyday routine. Read and learn from new news sources.  Employ logic to question your long-held political and religious beliefs.

Taurus: Think about ways to improve your income. Learn new ways to budget. Question financial advice and employ logic as you navigate your personal finances.

Gemini: Embrace a new way of being. Be confident in your own decision-making capacities. Learn about the you. Avoid being overly influenced by your advisors.

Cancer: Spend time in reflective thought, meditation, and prayer. Quiet your mind. Listen to the voice within. Question your work routine.

Virgo: Think about shifting your career. Freshen your `brand’ in the outer world. Release domestic obligations which limit you.

Libra: Think about ways to communicate your truth; marketing, speaking, or writing. Release outworn routines which limit your daily efficiency.

Sagittarius: Learn about yourself through relationships. Release old outworn images of yourself. Focus on strengthening your ability to connect.

Capricorn: Learn about ways to improve your health though nutrition and exercise. Release old fears, doubts, and prejudice.

Aquarius: Think about ways to embrace more creativity and joy in your life. Tap into your inner muse. Release friends who do not sync with your truth.

Agent 56: Cassandra Joan Butler, BSW, MS, LMT has been a noted practitioner of astrology, spiritual development and bodywork since 1987. Her background includes fourteen years of college teaching in bodywork, energy healing, and massage therapy as well as twenty years of adult community education workshops and private classes. She has presented at many international venues and conferences including Lily Dale, Chautauqua Institution, and United Astrology Congress. She is an ordained minister and medium and founder of the Divine Grace Fellowship Church which blends astrological wisdom with a healing ministry. She is the president of the NCGR (National Council of Geocosmic Research) Buffalo NY Chapter. Based in WIlliamsville NY, she maintains a retreat house in Chautauqua County. Cassandra holds degrees from Cornell University and Syracuse University and is a passionate life- long learner.