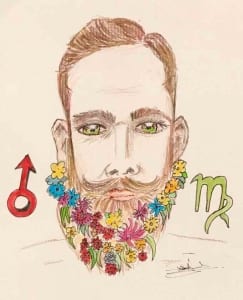 After an energized march through Leo, Mars tiptoes into Virgo on the 18th of August. The planet that rules warriors and athletes is a little uncomfortable in the sign of the virgin: will he work to despoil the sign, or channel his energy into constructive service?

Probably a little of both. Mars in Virgo can amp up issues over genetically modified food (or the food supply in general), healthcare, and the environment. We should remember that Mars can play on both sides of any of these issues, lending a fighting spirit to organic farmers but also to Monsanto.

The first major aspect Mars makes is a meeting with Venus on August 24th, and the two go on to trine Uranus on the 26th. Always a potentially passionate connection, Mars and Venus may find themselves a little shy in Virgo. There’s likely to be attraction, but also hesitancy in our personal relationships around this time, especially if they are in the fledgling stage. A nice healthy dinner with some wine (not too much) made from organic grapes might go well with the Virgo vibe.

Connecting with Uranus, Mars is likely to become more energized. This aspect suggests innovation around Virgoan concerns like food and healthcare. Technological developments may impinge on earthy matters, for good or ill.

On September 2nd and 3rd, Mars meets with the Sun and Mercury. This is an intense period, although the heat generated by the Sun and Mars is somewhat cooled in Virgo, especially as they meet just after the New Moon. Still, this is a time when we focus on what needs to be done before the year ends, and a strong “back to work” ethic prevails. We’ll no doubt be quite energized and ready to tackle new projects or complete existing tasks.

A further boost comes on the 9th, as Mars trines Saturn. Now that we’re past the first quarter moon, energy flows more easily, and this is a very good point to launch new endeavors. Mars benefits from contacts with Saturn, who helps him to focus his strength towards a specific goal. In Virgo, that can include working with tasks that require great precision.

Things get a bit more hectic in the time around the 11th through the 14th, as Mars squares Jupiter before opposing Neptune at the Pisces full moon. At this time, we’re likely to see all sides of any issue amping up their rhetoric and going to extremes. With Neptune in Pisces, immigration is a hot-button issue around the world, and Mars in Virgo (the sign of purity) is unlikely to help reduce the polarization that issue creates.

A stop-and-go vibe prevails around the 18th and 19th of September, as Saturn stations to go direct while Mars trines stationing Pluto. Saturn puts the brakes on things while Mars is impatient to get moving. Avoid multitasking around this time, but you can accomplish a great deal if you tackle one job at a time.

Mars leaves Virgo for Libra on October 4th, just as Mercury exits the sign of the scales for Scorpio, and only a day after Pluto stations to go direct. There’s an intense, somewhat implosive energy to this time. Use it for things that you need to do, but beware of free-floating energy attaching itself to random causes of the moment.

Those with significant placements in Virgo will feel the energy of Mars most directly, of course, and it may be a little uncomfortable. Yet the best of Mars in your sign is the extra vitality and strength it imparts – especially as his trip this year will coincide with that of the Sun, Mercury, and Venus. It’s a lot, but it won’t be dull!

Libra may also have a hard time, with Mars in its 12th house, as it can signal issues that come out of the blue, or present challenges that are hard to get a handle on. The other Air signs, Aquarius and Gemini are also challenged with this placement. Water bearers will discover it’s a good time to deal with finances and curb debt, while Gemini may find this a time to address some prickly matters around home and family.

Taurus and Capricorn both get the best side of Mars in Virgo, benefiting from the powerful Mars energy in an Earth sign. There’s a usefulness to this placement that can be very helpful to both bulls and mountain goats.

Leo may see an increased emphasis on finances, while Sagittarius could find that career matters are prominent (and come with a few challenges). Aries might also have to deal with work issues, but on a more mundane, everyday level – a coworker or employee that demands attention, for example. Rams should take particular advantage of Mars in Virgo to focus on leading a healthier lifestyle, watching diet and engaging in some sensible exercise (don’t overdo it, Aries!).

The Water signs can relate well to Mars in Virgo. Cancer can use the back-to-school emphasis on the everyday to take care of chores and routine tasks. Scorpio may find that social life gets energized during this period, while Pisces will find that partnerships of all kinds are in the spotlight, although there is also some potential to find an able opponent.