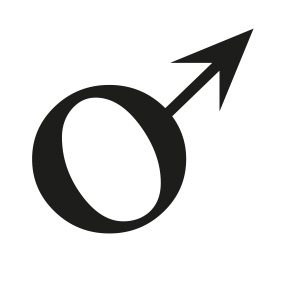 Glyph
The glyph for Mars is made up of the circle of spirit with an arrow on top rotated 140 degrees. The arrow is the symbol of will, direction, masculinity and taking action. Combined they represent primal energy of spirit being directed and focused.

Astronomy
When observed in the night sky, Mars appears to be red in colour, due to iron oxide found on its surface. Appropriately named after the God of war, Ares (Greek) or Mars (Roman), the planet has always been associated with fighting and blood. Being farther from the Sun than Earth, it appears in any place in the sky on the ecliptic. Mars experiences seasons and violent dust storms, and has polar ice caps of carbon dioxide. Features on Mars include an enormous volcano 550 km high (Olympus Mons) and the Valley Marineris, a system of canyons 7 km deep stretching 4000 km.

Mars is the fourth planet from the sun. It is the next planet beyond Earth.  The planet is about one-sixth the size of Earth. Mars has two small moons, their names are Phobos and Deimos.

Astrological Cycle
Mars takes just under two years to move once around an astrological chart and has a retrogradeperiod once every two years for about 11 weeks. The first Mars return is at two years old, when many toddlers begin asserting themselves during the Terrible Two’s. See more Mars Cycle