The Leo Aquarius Lunar Nodes – Destiny in Our Hands, Hearts, and Brains.

With the Nodes moving into Leo (North Node) and Aquarius (South Node), we move further away from the Mutable cross that has heavily characterized the year 2016 with mass migrations of refugees from the Middle East, Globalism, and the resulting surge of racism and extreme right.

With Jupiter moving to Scorpio in October 2017, and Mars travelling through a retrograde cycle for almost 6 months in Aquarius in the course of 2018, and lastly Uranus moving into Taurus by May 2018, we see a strong emphasis in Fixed signs. Subsequently, the following years 2019-2020 will return to the strong Cardinal flavor with heavy emphasis returning to Pluto in Capricorn.

Fixed signs capture the essence of creativity and manifestation. They represent what role WE have to play in this world, hence the strong intensity, concentration of energy, and sexual nature of these signs—squeezing our inner juices. With Leo and Aquarius in particular, the calling for leadership is emphasized and most importantly, the inspiration to create a better future. While the Virgo/Pisces axis referred to a need to integrate global dynamics and understand we must adhere to a reality larger than ourselves, the Leo/Aquarius axis reminds us destiny is in our hands. We are the creators of our destiny, where we inspire innovative ideas (Aquarius) or bring children to the world (Leo).

While there seem to be a definite evolutionary direction from the South Node to the North Node, there is a misconception that somehow, the South Node must be discarded, symbolizing something that sabotages our lives. It is my observation that the Nodes work ultimately as an axis with both polarities necessary and that the lesson is to integrate the South with the North Node.

While the South Node in Aquarius speaks of highlighting our higher mental capacities and adopting the unemotional and objective bird eye view to see past and future more clearly, the Leo North Node speaks of keeping the flame burning, and being inspired for our love for life to show up, take the stage of life, and manifest our destiny.

Aquarius without Leo is a collection of bright ideas that seldom see the light of day, discouraged by cynicism and the prospect of dirty work required to materialize them.

Leo without Aquarius is a demonstration of good-will and romantic ideals that can be short-sighted and lack maturity.

Both brain (Aquarius) and heart (Leo) are necessary for results to be valuable (Taurus) and transformatively powerful (Scorpio). 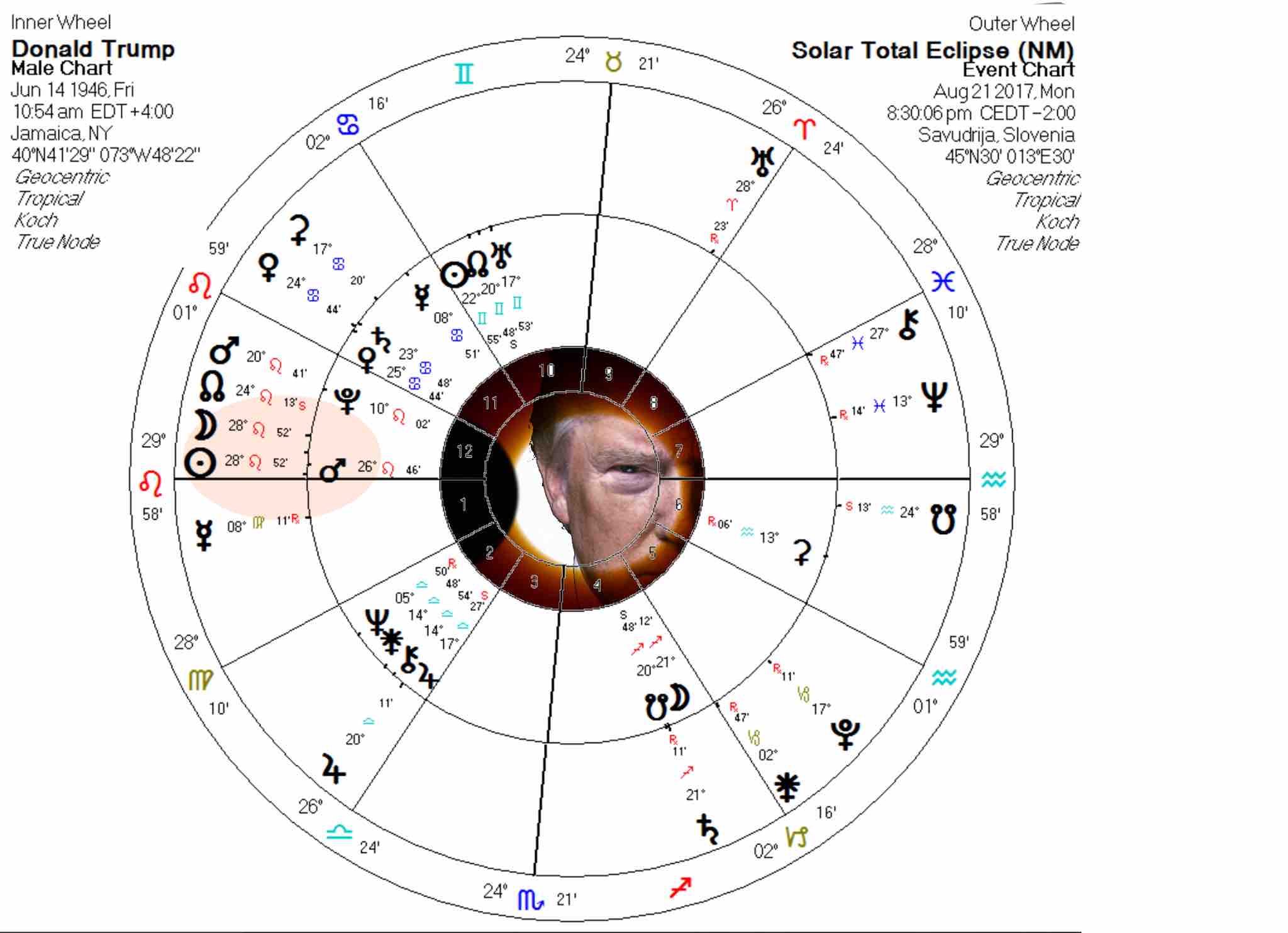 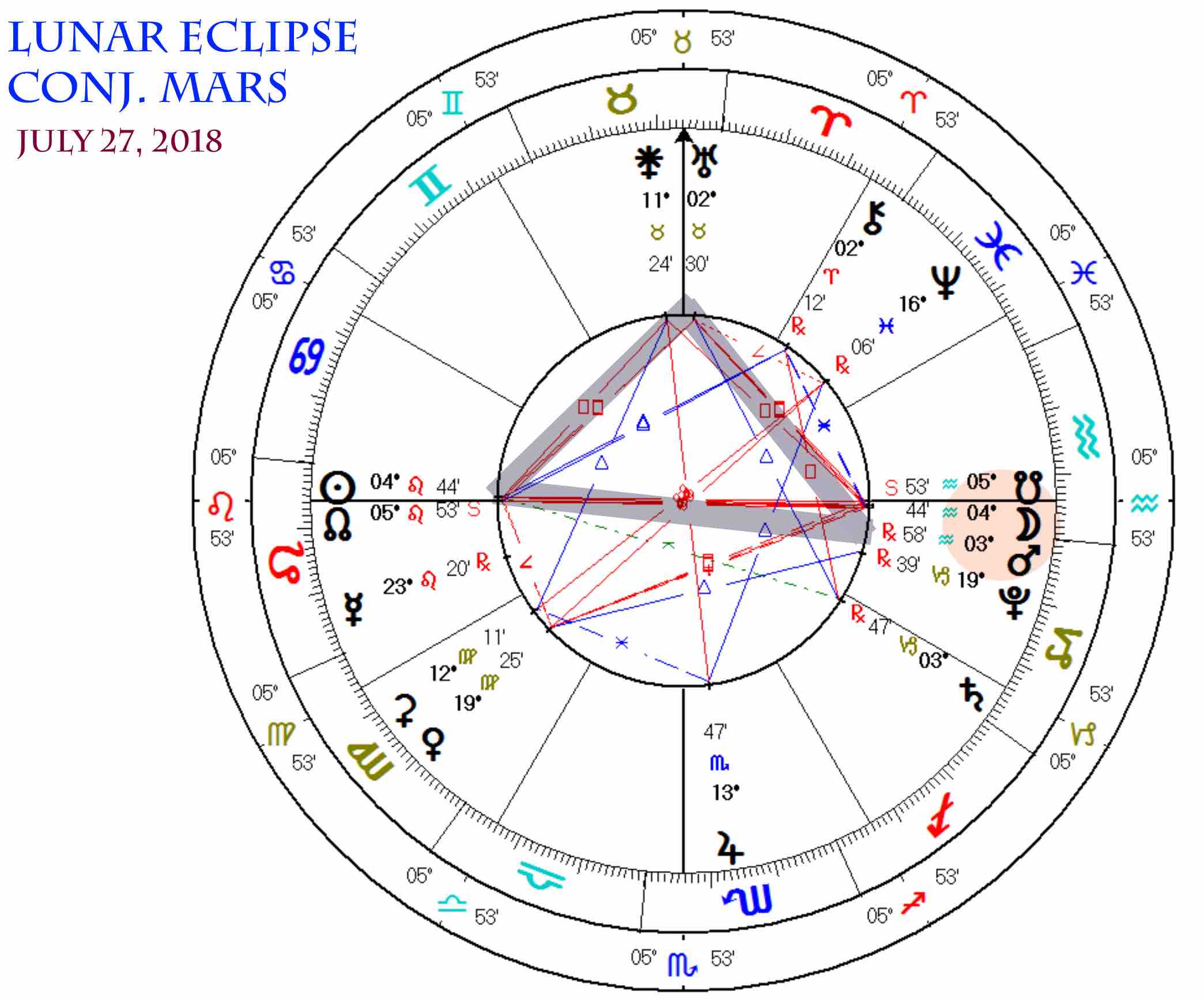 The rulers of the Nodes, namely Uranus and the Sun must be monitored during the transit as they will flavor the direction and application of these concepts. This is particularly noteworthy with slow moving Uranus moving into Taurus by May 2018.

As the North Node retrogrades from Virgo to 29 Leo, it will gradually form a tight Grand Trine with Uranus at 26 Aries, and Saturn at 27 Sagittarius.

This configuration can activate creativity on a personal level and activism on a more collective level, particularly with Uranus and Saturn involved describing a strong incentive to bring about reforms and change the status quo.

A very dramatic Solar Eclipse at 28 Leo, conjunct the fixed Royal Star Regulus and Mars in Leo will actually pass through the United States, from South Carolina to Oregon.

Eclipses are important “activators” and tend to accelerate processes in our reality. With the Eclipse in Leo, we can expect changes in our career and leadership direction, and or with our children.

Because Mars is involved in the eclipse, we can expect both more radical changes and volatility around that whole period of time. The fact that the Eclipse lands actually on Donald trump’s chart does not help tame the fire.

2018 will begin with a bang, with unstoppable Mars/Jupiter in abrupt and powerful Scorpio squaring the Nodes. We can expect important political and commercial development, as well as abrupt separations.

May 2018 – Uranus moves from Aries to Taurus

While Uranus in Aries brought a need to upgrade the status of our personal freedoms and to expand our liberty of action, Uranus in Taurus will bring a greater focus on Economic reforms and the need to sustainable use of resources.

Mars is flirting with the Nodes all along, from the August 2017 Eclipse to the October 2018 Conjunction to the South Node. This includes a Mars retrograde conjunction to the Lunar Eclipse of July 27, 2018.

Mars on the Nodes activates separatist sentiments and intensifies the need to take new directions. It represents a deep need to do things our own way, and since it is in Aquarius, we can expect more polarization, a personal sense of alienation, and a need to completely reinvent ourselves.

This can create both a climate of adversity and even violence, and breakthroughs and new discoveries. 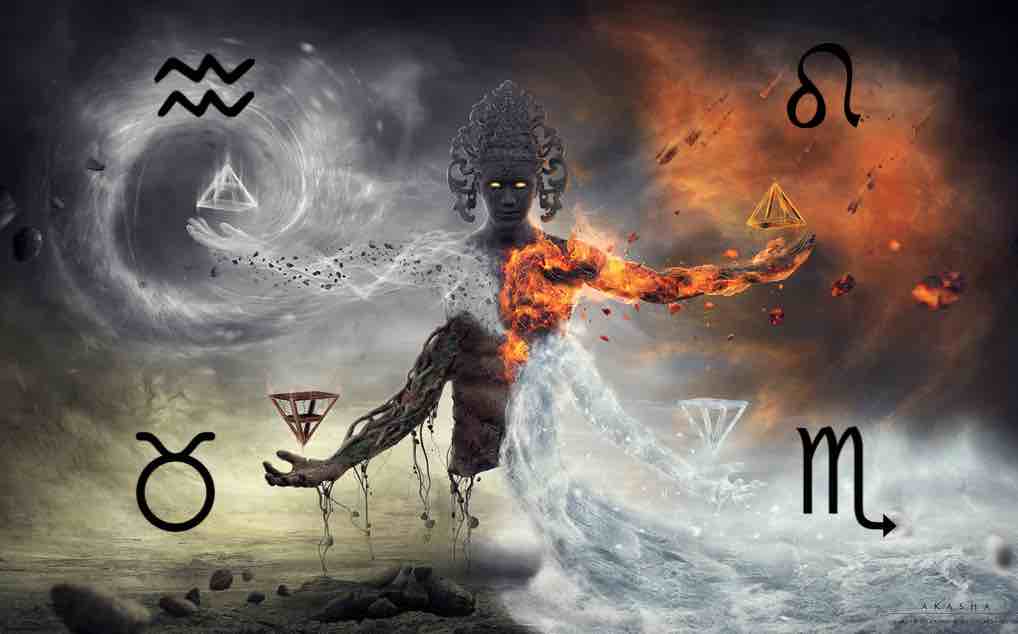 CONCEPTS FOR THE LION/AQUARIUS NODES

Maurice is the author of the books Neptune, the 12th House and Pisces (forthcoming New Edition), and Astrology and the Evolution of
Consciousness—Volume One. He is a leading Evolutionary Astrology counselor and teacher, currently based in Arizona.

Maurice currently serves as the president The Organization of Professional Astrology (OPA). He directs a correspondence and on-location professional certification program and has organized several conferences in the US and Europe, notably The River of Stars in Hawaii (2011, 2015).

View all Articles by Maurice

Maurice is the author of the books Neptune, the 12th House and Pisces (forthcoming New Edition), and Astrology and the Evolution of
Consciousness—Volume One. He is a leading Evolutionary Astrology counselor and teacher, currently based in Arizona.

Maurice currently serves as the president The Organization of Professional Astrology (OPA). He directs a correspondence and on-location professional certification program and has organized several conferences in the US and Europe, notably The River of Stars in Hawaii (2011, 2015).

View all Articles by Maurice

We use cookies on our website to give you the most relevant experience by remembering your preferences and repeat visits. By clicking “Accept All”, you agree to the use of ALL the cookies. However, you may visit "Cookie Settings" to provide a controlled consent.
Cookie SettingsAccept All
Manage consent