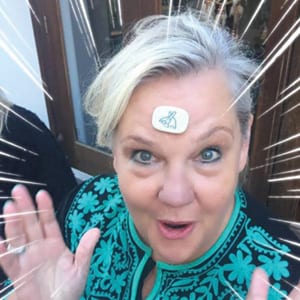 Consultations and Mentoring with Julija

The wheel behind the cogs. Agent 12 started the C*I*A with the grand idea that the world needs unity, a grand vision and a plan. In it’s own small way Julija hopes the Agency can contribute to raising consciousness, global awareness, unified thought and a better world through the fascinating world of Astrology. Completing a Diploma in applied astrology from “Astrosynthesis”- Melbourne, Julija wrote her finishing thesis- on the ANIMA MUNDI- in 2005  inspiring her to put her ideas into motion, regardless of how idealistic and kooky they may have seemed at the time. She found a few interested Agents and started the ball rolling. Agent 12 – contributes to many articles and ideas on the site, organizes C*I*A events and promotes Anima Mundi awareness.

Often asked why I picked to be Agent 12, I was born 12th March 1964, 12th sun sign- Pisces, a stellium in Pisces and a Balsamic Pisces Moon. Number 12 also the most divisible number there is, suiting Pisces very well and the many roles I play within the Agency.  (Barbara Feldon – Agent 99 – from the TV series “Get Smart” is also born 12th March, funny coincidence).

Julija is married has three children,  was once a TVC animator and jewellery maker and brings all these skills together with Astrology in the ongoing project which is the C*I*A. She  organizes regular workshops, writes the daily posts for the C*I*A and Facebook page and other feature articles, hosts regular webinars, is a keen researcher and makes the occasional astrological documentary film. The first film being Neptune’s Return 2009, the 2nd “THE EDGE OF CHAOS” A timeline of Astrology.

Julija has lectured at various C*I*A events and workshops in Australia and International, online and in person. Presenter at UAC 2012 in New Orleans , a speaker at the  ISAR conference in Arizona September 2014 and Los Angeles in 2016, Astrology Rising Conference, Costa Rica, 2017, and online 2020,  IVC Conference, Kolkata, India 2018 and  the 8th Astrology Days Conference in Istanbul, Turkey,  March 2019.

Julija lectures  and teaches online for the C*I*A, events, symposiums Free webinars (see C*I*A website)  and the New Paradigm Community community regularly and for other organisations like Kepler College and OPA as required.

Julija is a practising astrologer available for consultations, lessons and presentations in Melbourne, astrology classes in Melbourne and online.

Julija has lectured at various C*I*A events, workshops, conferences and retreats around the globe and in Australia, and online over the past 12 years,

Classes, workshops and presentations with  Julija

Science, Art and Magic of the Sabian symbols

Agent of Chaos : There’s something about Eris!

Jupiter in Pisces with Julija Simas

Astrology of Bitcoin and Cryptocurrency

Originally made for C*I*A Membership in 2017, we now release this to the general public Agent 12 Julija Simas, Agent 56 Cassandra Butler and Agent 55 Vanessa Guazzelli gather together some great and valuable info on Bitcoin and Cryptocurrency, Timeline of video begins with – Eclipse stories and Libra [...]

January 8th 2017 would have been David Bowie’s 70th Birthday! With an Aquarius Ascendant and Venus at the Midheaven in Sagittarius, and a warm and creative Leo Moon, he was a man always ahead of his times in music and in fashion. With a Capricorn Sun conjoined Mars exalted in the [...]

Astrolocality - how to read your astrology chart on an astro map - focus on method, techniques, examples

What follows is a reflection on where are we now, as an introduction to where we are going astrologically as we enter the future. The new decade starts with some potent markers and moves, through some big new planetary landscapes. Quite often we are told that we Astrologers can act [...]

AGENT 12 - JULIJA SIMAS2021-09-05T05:40:05+00:00December 25th, 2020|
Read More
12Next
We use cookies on our website to give you the most relevant experience by remembering your preferences and repeat visits. By clicking “Accept All”, you agree to the use of ALL the cookies. However, you may visit "Cookie Settings" to provide a controlled consent.
Cookie SettingsAccept All
Manage consent