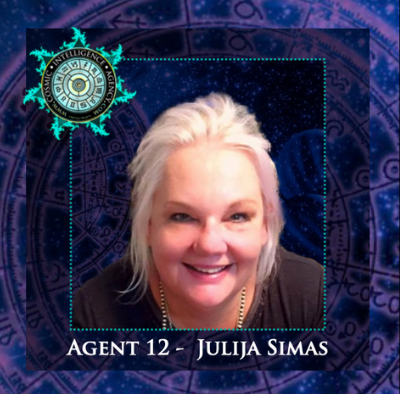 Consultations and Mentoring with Julija

The wheel behind the cogs. Agent 12 started the C*I*A with the grand idea that the world needs unity, a grand vision and a plan. In it’s own small way Julija hopes the Agency can contribute to raising consciousness, global awareness, unified thought and a better world through the fascinating world of Astrology. Completing a Diploma in applied astrology from “Astrosynthesis”- Melbourne, Julija wrote her finishing thesis- on the ANIMA MUNDI- in 2005  inspiring her to put her ideas into motion, regardless of how idealistic and kooky they may have seemed at the time. She found a few interested Agents and started the ball rolling. Agent 12 – contributes to many articles and ideas on the site, organizes C*I*A events and promotes Anima Mundi awareness.

Often asked why I picked to be Agent 12, I was born 12th March 1964, 12th sun sign- Pisces, a stellium in Pisces and a Balsamic Pisces Moon. Number 12 also the most divisible number there is, suiting Pisces very well and the many roles I play within the Agency.  (Barbara Feldon – Agent 99 – from the TV series “Get Smart” is also born 12th March, funny coincidence).

Julija is married has three children,  was once a TVC animator and jewellery maker and brings all these skills together with Astrology in the ongoing project which is the C*I*A. She  organizes regular workshops, writes the daily posts for the C*I*A and Facebook page and other feature articles, hosts regular webinars, is a keen researcher and makes the occasional astrological documentary film. The first film being Neptune’s Return 2009, the 2nd “THE EDGE OF CHAOS” A timeline of Astrology.

Julija has lectured at various C*I*A events and workshops in Australia and International, online and in person. Presenter at UAC 2012 in New Orleans , a speaker at the  ISAR conference in Arizona September 2014 and Los Angeles in 2016, Astrology Rising Conference, Costa Rica, 2017, and online 2020,  IVC Conference, Kolkata, India 2018 and  the 8th Astrology Days Conference in Istanbul, Turkey,  March 2019.

Julija lectures  and teaches online for the C*I*A, events, symposiums Free webinars (see C*I*A website)  and the New Paradigm Community community regularly and for other organisations like Kepler College and OPA as required.

Julija is a practising astrologer available for consultations, lessons and presentations in Melbourne, astrology classes in Melbourne and online.

Find the latest Interview Dec 2022 with Julija from the AstrologicalAssociation Journal
https://cosmicintelligenceagency.com/interview-astrological-journal/

Classes, workshops and presentations with  Julija

FROM the ASTROLOGICAL JOURNALS - DEC 2022 edition Astro-X-Ray: Julija Simas Q: When did you first realise that astrology had completely taken possession of you – if indeed it has? JS: The first time was probably in class, when my teacher explained Uranus and Moon combinations, it was of course uncanny [...]

Patterns, signs and signals : Mars and Venus in 2022

A year that begins with Venus retrograde and ends with Mars retrograde is surely one that will re-structure and re-activate, re-design and re-configure many aspects of our lives. When these two quicker moving planets slow down to make bold statements, to bind the start and end of a year,  we [...]

Venus infused Solar Eclipse 2° Scorpio. Eclipse cycles come in 2 kinds Metonic and Saros as 18 and 19 year cycles, with the nodal cycle in-between at 18.6 years. METONIC CYCLES -  Eclipses happening every 19 years in the same place/degree of the zodiac. They occur 3-5 times and then [...]

In the beautiful green hills and valleys of Healesville Victoria, we gather again for another inspired C*I*A experience, not only for a deep immersion into astrology but also to calm the mind and soothe the spirit with great company and beautiful surrounds as we explore the many facets of Venus in our lives and astrology.

Uranus the North Node and Astrology

Uranus meets the North Node in Taurus 2022 Maurice Fernandez, Cary Caton Julija Simas discuss - the developments of astrology thru the lense of Uranus North Node conjunctions. In 2007 astrologer Robert Blaschke wrote about the conjunctions of the North Node and Uranus as indicators of the rise of different types [...]

What follows is a reflection on where are we now, as an introduction to where we are going astrologically as we enter the future. The new decade starts with some potent markers and moves, through some big new planetary landscapes. Quite often we are told that we Astrologers can act [...]

Mars in last degrees of Aries opposes Aries Ingress Moon of 29° Libra, (and squares Pluto) with another mass shooting in USA On the Aries Ingress chart we see - Saturn in Aquarius (freedom to be in control? the right to bare arms) goes right through Chicago - In San [...]