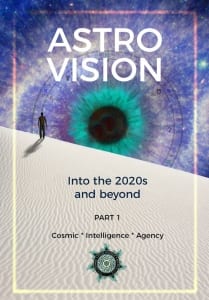 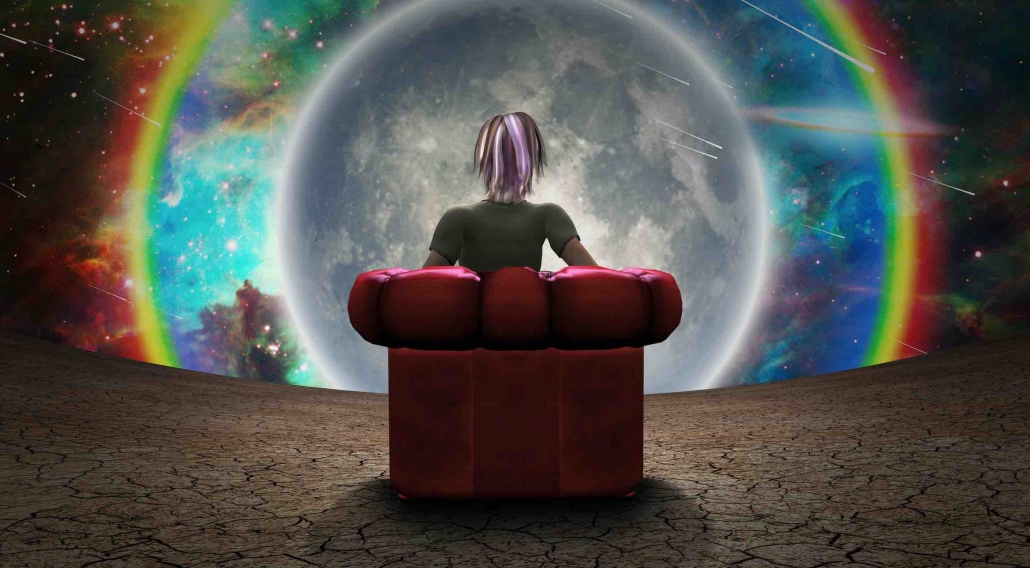 For the Love of Humanity ♡

“One Love ~ One Heart ~ One Destiny” Bob Marley

Stay sharp and cool as an electrical flash of airy realisation often comes with the Aquarian Sun, and feel the glowing warmth of humanity’s beating heart, as the fiery Full Leo Moon is reinforced by relationship planets, also in fire signs, to make for a highly spirited Full Moon. Elementally aligned, loving Venus in assertive Aries and energetic Mars in far-sighted Sagittarius set a dynamic pace. Three ‘inner planets’ in fire excite quickly to turn up the heat, adding spice, truth, and passion to current events and personal situations.

When the Full Moon is in Leo sparks fly igniting into motion a time where it is most important to learn how to love oneself. Not in the egotistical outa-my-way-I’m-coming-through manner, more like taking care of our internal spirit and inner child. By looking after ones’ self to be the best you possibly can, it’s not just for yourself; something magical  happens when we nurture love from within, as we then begin to thrive in playful joy and bring joy to others. This is the creative you, lively and right, which presently holds head high and entertains self and others within the hub of humanity’s larger wheel of life. Treating others as we would like to be treated our self, it’s with the Full Moon in Leo reflecting the rays of the altruistic Aquarian Sun that we also align individually to humanity, not just as a fellow citizen or national, but to the greater whole, civilization itself.

☆ Under the enchanting moonbeams of the Leo Moon in a ‘Trine’ aspect to a stimulating Sagittarian Mars (conjunct the Galactic Centre), the potential is heightened to find a deeper personal meaning when sensing our position within the greater collective without falling into a black hole. And that also means being brave and having the courage to be honest with one self.

True, this could be a testing Full Moon for a shy wallflower, but it is the Moon for romance and fun, gatherings and parties, to get in touch with the optimistic innocent who innately radiates friendly, heartfelt love – the one love, one heart, one destiny kind of love.

☆ Those born to perform often reveal both, the honourable and glamorous sides of a Leo Moon. The late, great, David Bowie for instance, is a perfect example how a self-possessed Leo Moon shines brilliantly with noblese oblige. Throughout Bowie’s life he artistically morphed into various avatars using mime and theatre to bring drama to his music; acting with supreme self-assurance he even refused a knighthood three times. When asked why, he said he ‘didn’t do it for that reason’, i.e. recognition. Because he already knew he didn’t have to conform to tradition as the Leo Moon believes in his or her personal star quality and lets it out for the world to see. Bowie’s Leo Moon also guaranteed he could play every instrument in his band and sing his entire repertoire without ever referring to notes: quite some feat for someone so prolific and experimental. There is much we can all learn about not needing to conform to other’s expectations right now.

☆ The Aquarian Sun also tends towards the rebellious, the radical and unpredictable, weird and wonderful. While a Sun-ruled Leo Moon loves to ham-it-up for an appreciative audience – being the centre of attention with back-slapping comradery makes Leo Moon feel secure. A splurge of selfie uploads could be fun during this Full Moon too, but not if it becomes a narcissistic chase for vainglory.

This Leo Moon exudes personal authority for sure, but it also demands we check inner self-respect and self-confidence to keep pride in place. There’s a generous side to the Leo Moon too, which often gives freely, be it time or money, advice or compliment. Feel free to commit random acts of kindness throughout the three-night Full Moon. Continue forever if it feels good. A Leo Full Moon is kind to others because it also gives them, as the giver, a sense of well-being too, and a way of feeling connected to kindred spirits.

☆ That said, apart from applying connections to Mars, Sun and Moon only form only secondary aspects to regular planets. But the ‘Lights’ do line up a ‘Fixed ‘T’ Square’ to asteroid Vesta at 17° Taurus, adding fixity and the WILL to work and enhance personal decorum, as well as home and finances. A Trine from the Moon and Sextile from Sol to outer-planet Eris means we would also do well to watch how we personally tune into and/or contribute towards collective chaos, i.e. do we fan the flames of panic and fear or do we take whatever comes in our stride: the Moon in the horoscope shows how we react.

☆ The Moon as ‘Singleton’ ☆
Looking at this month’s actual Full Moon horoscope, we see how the Moon is ‘The Singleton’ ‘The Handle’ of a ‘Bucket’ shaped chart at the exact time of the Leo culmination, meaning emotions benefit from rational thinking – as well as trusting intuition during a first Full Moon of the year of the White Metal Rat: one that is the fourth closest to the Earth for 2020, so we are Moon bound to get slightly higher tides of emotions as well as in the oceans and rivers.

Go easy on the drama, as the ‘Singleton’ Moon symbolises emotional confrontation when holding everything together; the urge to be creative also manifests, especially because the Moon is in artistic Leo. Note: this is the first of four ‘Singleton’ ‘Moon handles’ for the year, which provides a chance to learn how to emotionally handle any onslaught of demands made. As the Moon rules mother, her cycles, food, and nurturing our sensitive soul, the singleton Moon focuses upon and naturally empowers the feminine.

For a cycle-watching astrologer it also is rather interesting, especially when we consider how the Moon in mundane ‘world’ astrology (as opposed to the spiritual astrology school from which I usually emanate), represents ‘the people’, you and I, and how the 99% all flow and emote in socio-political trends (and fashion). Because the outer-planets, Uranus, Neptune and Pluto, spend years in each sign; and because these outer-planets only have 100 degrees presently separating them; as there are times when personal planets, including the energising Sun, also slot into this tight quadrant, this is when the Full Moon in her femininely empowered focus comes into play.

Even as a seasoned astrologer with over three decades practice, I’m not aware of any studies on long-term waves of Singleton Moons to reference, but it would make sense how these mirror a time when women’s issues come into focus. Especially strong women could also galvanise others to hold space when others are emotionally sensitive, reactive, manipulated and distracted by the sheer size and force of planets contained within the opposing stellium; and those with mother complexes often need the (re)assurance that only a woman (or a sensitive man in touch with his feminine side) can give.

The Singleton Moon can also give rise to a feeling of emotional isolation, even when we are so incredibly connected otherwise. It can also indicate how one person/idea/thought can inspire people come together to generate the strength and courage to face corrupt authorities with a friendly demeanour, especially when a generous, sun-ruled Leo Moon opposes the Aquarian Sun which, although in detriment by being in a sign opposite its rulership, still encourages networking, but with heart.

Two other aspects of interest over this Full Moon include

i) Slow and also in detriment, Mercury is coming to a full stop to go retrograde at 12° Pisces, February 17th. Mercury tends to be dreamy as well as vague and confused in Pisces – and although not that great at map reading, unless for magical purpose then it can be uncannily perceptive. It goes forward 10th March at 28° Aquarius. During this three week period a course of miracles could lead to clarity and breakthrough. 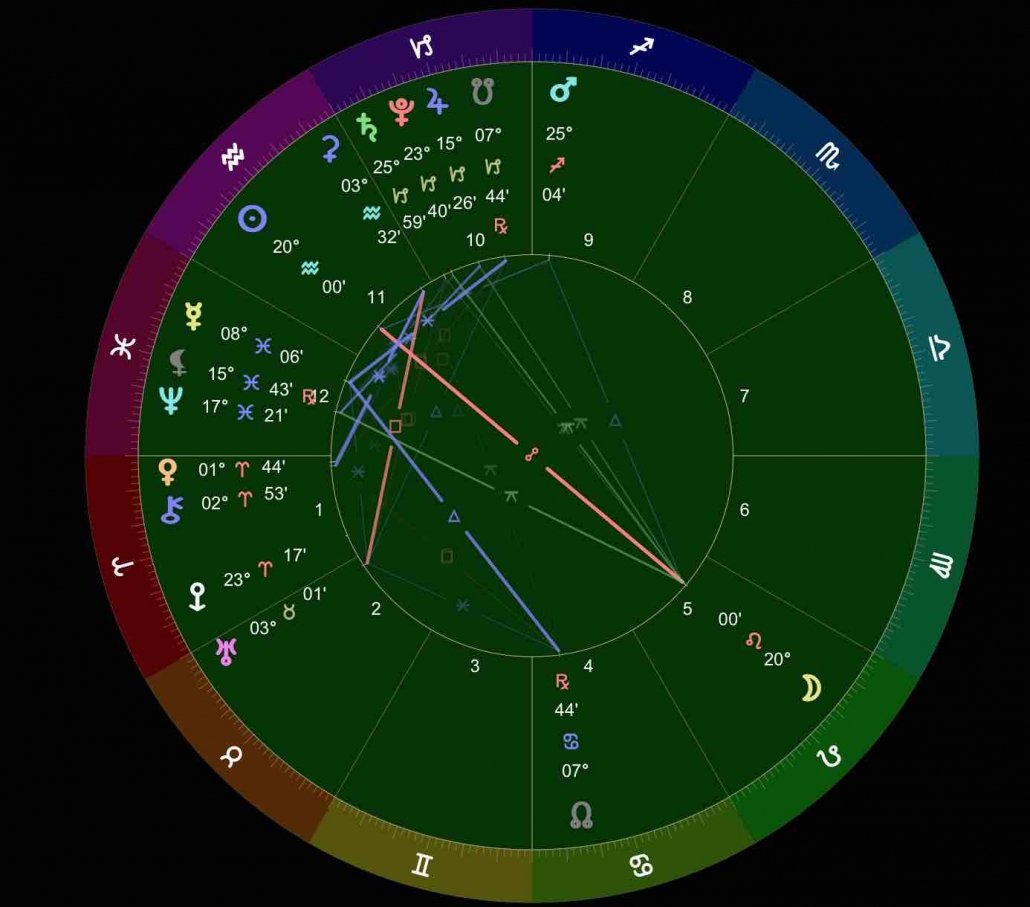 ii) Jupiter Sextile Neptune
☆ The first of three hits between Jupiter in sextile (60°) to Neptune takes place February 20th. This harmonious aspect is in almost precise alignment all year, and is the last series of triple connections before Jupiter and Neptune unite in Pisces 2022, which should be an amazing time of oceanic regeneration of compassion and loving kindness. But for now Jupiter, truth-seeking planet of expansion, is in restrictive Capricorn, conjunct controlling and transformational Pluto (!) and Saturn at home in Capricorn commanding discipline and power; with all three shaping a sextile to imaginative Neptune at home in watery Pisces, Jupiter’s connection is currently the planetary link that is exact. Check 17° Capricorn and Pisces to see what you may need to happily let go of in order to consolidate and remain buoyant.

These are not easy astral associations by any means. There’s a multitude of ways in which this particularly tricky and slippery set of aspects could play out, with a cast of fairy tale characters from nebulous shady spies to fearless superheroes, befitting a glamourous Hollywood movie blockbuster. Jupiter with Saturn and Pluto can expand cynical tyranny, whilst Neptune in Pisces, heightens the influence of the unseen, trends and that which is viral, with the illusion-delusion compounded by Mercury Rx, making it doubly difficult to tell truth from lies, or trust and faith from any ruthless and cruel, ambitious charlatan. Thus, this astral combination comes with a hefty warning: because so much these days appears to be lost, polluted or morally corrupt, we could merrily trip down the Neptunian bamboozle route and seek saviours to rescue with a way out of the confusion and chaos that we’re all experiencing in one form or another. Should this be the case, one would totally miss the profound spiritual teachings which this significant, and easily overlooked, aspect brings.

Place faith in a Divine, higher consciousness, by all means, but only we can save ourselves. Only we can do what it takes to make the world a better place, for all beings. Only we ourselves can practice enlightenment. Jupiter thankfully provides confidence and optimism in the face of fear and adversity. And of course it helps when those in authority proffer respect and support for all. But not all humans are necessarily humane. Many still have animalistic tendencies sadly, and these only get worse if or when inhumanity is rewarded. Neptune in Pisces symbolises unconditional compassion and forgiveness, however.

While those who inhabit ivory towers tend to suffer from a serious shortage of empathy and really don’t know how to care about what happens to you or me – it is also why it is important to now organise and begin to build self-reliance among kindred spirits who do know how to care, and who do know how to be loving, kind and creative and find the strength to keep one’s moral compass pointing true. Never give up! Think global, act local. The greater force of a Leonine Full Moon ‘One Love’ beams brightly, enabling light-hearted forgiveness towards those who lack such developed emotional intelligence.

A New Moon on the 23rd February signals a new start for the compassionate heart.

Until the March 9th SuperMoon, wishing all love and happiness,

Get your C*I*A EBOOK Purchase HERE