A few things to consider looking at back 2016 USA election day transits and those for 2020 ( using Noon Charts and zero Aries, only noting conjunctions, squares, oppositions and significant trines)

It’s interesting to see that quite a few things are opposite what they were in 2016.  By comparing the 2 charts and what all the planets are and were doing, and how they aspect the natal charts of candidates, I see quite clearly a reversal of fortune, of what transpired 4 years ago.

Although the cosmic line up seems quite chaotic these days with the CAP stellium and Neptune square the nodes, there are still a few indicators that things are being reigned in by the planets, Mars (in fire) and Mercury (in Air), also stationing in positions nudging 2016. 2020 chart shows the Sun is ruled by Mars in his own sign stationing, the Moon ruled by Mercury, the North Node ruled by Mercury, stationing in Venus ruled Libra, in her own sign of rulership. Interesting too is that Mercury rules DT’s Sun, and Mars Biden’s Sun.

Venus , Saturn and Mars in rulership, as well as there being no OOB planets in 2020 chart. Looking at DT’s 2016, 2020 options, I see he played a necessary role in shaking things up, but his role is now reversing.

Eclipse cycles too add to the dynamics of what unfolds at any given time.

Another important aspect to consider as 2020 ends and the New Great Cycle of Jupiter and Saturn births on 21st December 2020 at Zero Aquarius, we could also see that conjunction as already taking effect.

2016 did not have any major cycles come together like 2020.
In 2016 we had the end of opening square of UR square PL , and the closing square of Jupiter square Pluto.

2020 has the great cycles of JU, SA and PL, Ceres re-seeding in this unprecedented year and astro line up. 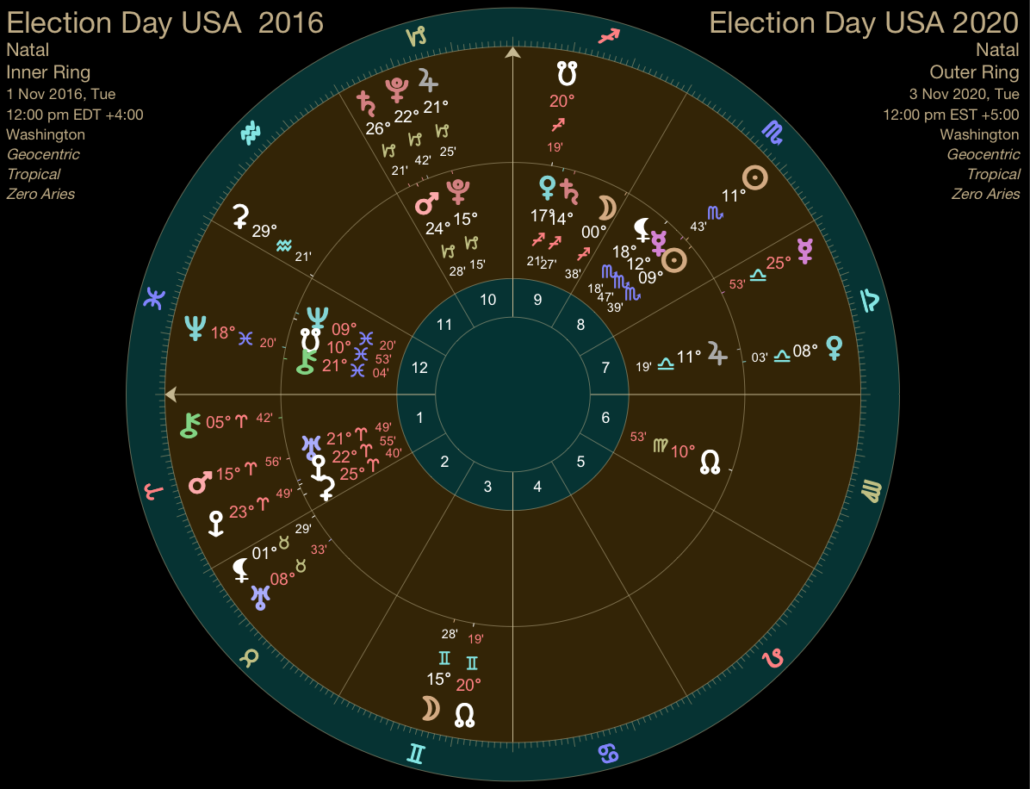 Check out what and how other astrologers are looking at the event in various ways, with this great compilation, on SKYSCRIPT UK