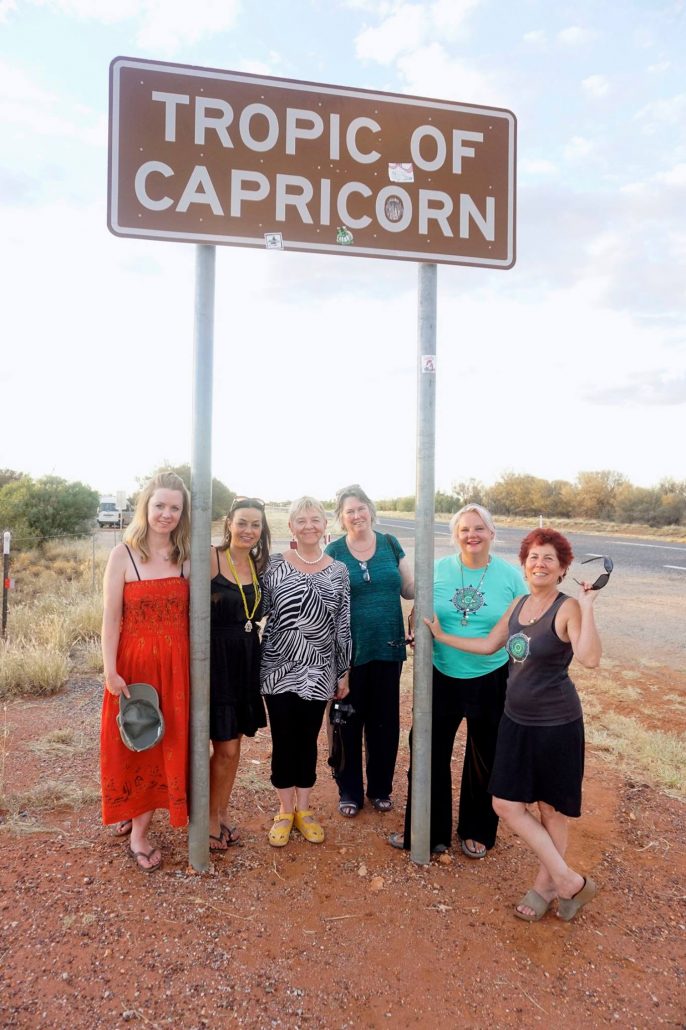 After another wonderful Star Camp in outback Australia, with a few agents still staying in Alice Springs, we decided to go on another adventure, This time to visit the Tropic of Capricorn 29km’s North of Alice springs and where we were staying. It may seem like no big deal, but it is to us C*I*A agents as the Tropic of Capricorn is 23-26, so is the Ascendent of the C*I*A, a chart we use for  when the purchase for the Cosmic Intelligence Agency website name on August 23rd 2:45pm, 2005 – in Melbourne Australia. This C*I*A chart has 23-37 Capricorn rising.

So, heading 29 km North to our Ascendent line, we realised that 29 is a Saturn number, and the amount of years it takes Saturn, ruler of Capricorn to rotate around the Sun.

The Tropic of Capricorn (or Southern tropic) is the circle of latitude that contains the subsolar point on the December (or southern) solstice. It is thus the southernmost latitude where the Sun can be directly overhead. Its northern equivalent is the Tropic of Cancer.

It was nearly sunset upon our arrival, and as the photos above show, a sign and a monument depict the line of the Tropic as it crosses the main highway North. Upon arrival at the monument we read all the information, but were perplexed by an image that  depicted what was obviously a Ram and not a Goat as you would expect at the tropic of Capricorn. There is no sheep farming in this area, some suggested it was a woolly goat, we liked it however, as the C*I*A has also an Aries Moon.

On arrival back to Alice we asked some of the locals, what was the Ram all about? We found out that years ago, when the artist was commissioned to draw the picture that would grace this monument, he tricked the authorities by drawing a Ram and not a Goat, which is associated with the sign of Capricorn. Many years later it is still there and most people who stop to visit would be none the wiser. Except being the C*I*A, he couldn’t pull the wool over our eyes. The story was told to us by a local artist Dan Murphy(AgentPi) who said his friend, now deceased a controversial artist, decided to play this trick on the public and his commissioners andhere it still remains.

The artist was Bardius Goldberg who became well known for another artist trick, when he created  The Marree Man, or Stuart’s Giant,  a modern geoglyph discovered by air on 26 June 1998. It depicts an indigenous Australian man hunting birds or wallabies with a throwing stick. It lies on a plateau at Finnis Springs 60 km (18 mi) west of the township of Marree in central South Australia. The figure is 4.2 km (2.6 mi) tall with a perimeter of 15 by 28 kilometres (9.3 mi × 17.4 mi). Although it is the second largest geoglyph in the world, its origin remains a mystery, with not a single witness to any part of the expansive operation. Except that some people that knew Bardius, know the full story.


At this spot we did however meet, an old man, camping in his trailer  with his satellite dish, on a trip around Australia alone, yet happy. His hair was long and grey, his eyes were grey, he didn’t want us to leave and was intrigued by what we were doing there.As we drove away we realized he really was old man Saturn, or the goatman.